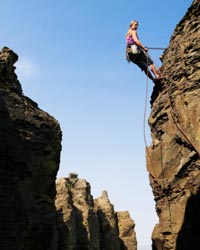 Before you set out to take a hike or scale a mountain, you'll want to know a few important details. Is the route you're planning to follow as challenging as climbing the southeast ridge of Mount Everest, or is it as easy as a stroll in Central Park? Is it icy? Will you need equipment to help you along? What would happen if you slipped and fell? Many of these questions can be summed up in what's known as a climbing grade.

Climbing grades are systems of letters or numbers (or in some cases letters and numbers) that let climbers know what to expect from the routes they are going to take. Without these ratings systems, it would be difficult to know from place to place what a climb is going to be like, and whether or not you have the skill, ability and guts to handle it.

But how do these factors translate into a letter or a number? Well, that's the tricky part. Each grading system has a different set of criteria used to assign a grade to a climbing route. Grades are assigned to routes based on personal experiences and observations. They're best estimates that are a result of assessing only some factors, and they're in no way meant to cover everything a person could encounter during a climb. We'll get into more detail about how these systems actually rate climbs, and the different ratings systems used throughout the world, in the next sections.

Free climbing is a type of climbing that uses nothing but a person's body to maneuver from one point to the next. Climbers don't use ropes, hooks or other climbing aids -- a person's hands, feet and fingertips are the only tools necessary. Gripping onto cracks and stones on the surface, the climber works his way to the top using his own physical strength and agility.

The two major grading systems for free climbing come from the United Kingdom and the United States. The British system of climbing grades is made up of two parts: the adjectival (descriptive) grade and the technical grade. The adjectival grades describe the overall difficulty of the climb and include: Easy, Moderate (M), Difficult (D), Very Difficult (VD), Hard Very Difficult (HVD), Mild Severe (MS), Hard Severe (HS), Severe (S), Very Severe (VS), Hard Very Severe (HVS) and Extremely Severe (E). Beginners can usually climb a route with an Easy or M rating. The higher grades, such as S, VS and HVS, are for more experienced climbers.

The American grading system for free climbing is the Yosemite Decimal System (YDS). It's also made up of two parts -- classes and grades. The classes, numbered 1-5, describe the overall difficulty of the climb, becoming more difficult as the number gets higher. For example, Class 1 is general walking and hiking, while Class 3 is easy climbing that requires the use of your hands.

Class 5 climbing, the most technical, is subdivided into grades. These grades appear after the class and are written in a numbered decimal system (5.0, 5.1, 5.2, all the way up to 5.14). A grade 5 with a class of 0 (5.0) would be difficult, but would require little technical skill. A rating of 5.14, on the other hand, would be very difficult and require excellent climbing skills.

Often it's the first person to make a climb that gets the honor of assigning a grade. But that doesn't mean a grade is fixed and can't be altered based on the input of other climbers. As more people make the climb, a grade can be adjusted and changed to better reflect the difficulty of the route. 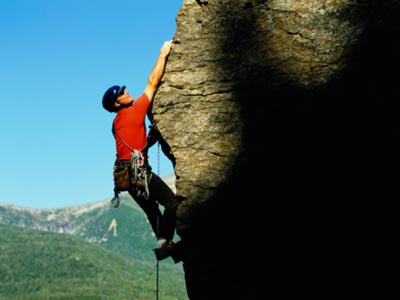 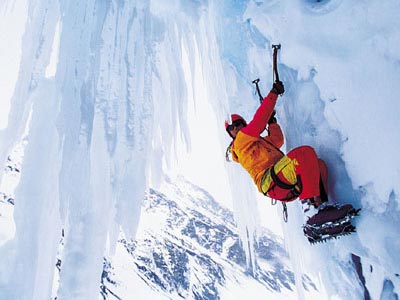 Bouldering is a lot like free climbing in that climbers do not use ropes, hooks or aids of any sort -- just their hands and feet and a little bit of ingenuity. The main difference between the two is that bouldering usually takes place closer to the ground, where a fall would not be as dangerous, while free climbing can be at any height. The name "bouldering" comes from the fact that close to the ground there tend to be a greater amount of large rocks and boulders to climb.

The two most common systems for rating bouldering are the V grade and the Fontainebleau grade. Another less frequently used scale is the B grade.

The V grade system was developed in the U.S. by a climber named John Sherman. He was nicknamed "Verm" by his friends; hence the "V." The V grades attempt to rate the overall climb. Originally, the V grades went from V0 to V15 (V0 being the easiest and V15 being the hardest), but the V grade was criticized for not including enough easier ratings. And so grades of V0+ and V0- were added, as well as VB (Beginner), to account for easier climbs.

Because of the problems with the V grade system, the B grade system was developed. It ranges from B0 to B15 and is meant to allow more room in the lower grades (both B0 and B1 cover what the V scale describes as V0).

Another popular bouldering grade system is the Fontainebleau system. Developed around the climbing scene in Fontainebleau, France -- which some call the bouldering capital of the world -- this system uses as series of numbers, letters, and symbols to rate a climb. The scale ranges from 1 to 8, where higher numbers indicate greater difficulty. Each number is further divided with letters a, b and c, and the use of a + symbol. So, for example, each number would follow a sequence like this: 6a, 6a+, 6b, 6b+, 6c, 6c+ and so on.

Bouldering and free climbing are all about using your body to get around the rocks. But sometimes it can be too difficult -- or too dangerous -- to attempt a climb without the use of tools and climbing aids. In the next section, we'll talk about the grading scales for aid climbing, or climbing with climbing tools, which are used for some of the world's most daring and dangerous climbs.

The Problem of Bouldering

One of the appealing aspects of bouldering is trying to mentally figure out which route or course of action is best to take. Because of this, bouldering routes are sometimes called "problems," which is very fitting, since it's a sport that requires a great deal of problem solving. 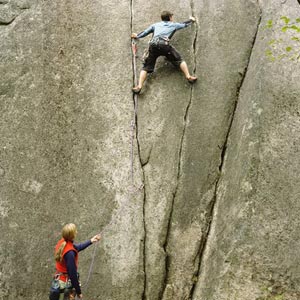 For more information about climbing, mountains and other outdoor adventures, explore the links on the next page.

Why was Alaskan fishing named the most dangerous job in the world?
How Hunting Leases Work
How Predator Hunting Works