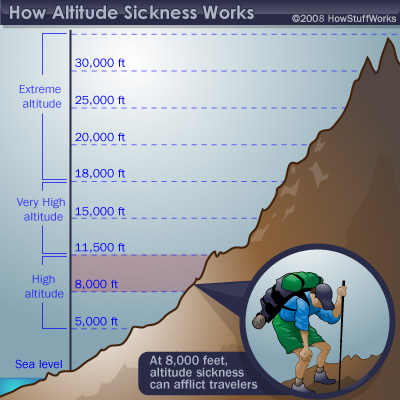 Atmospheric pressure (which is measured with a barometer and is also known as barometric pressure) is a measurement of air's force against a surface. At low elevations, the pressure is greater, since the molecules of air are compressed from the weight of the air above them. However, at higher elevations, there's less pressure and the molecules are more dispersed.

The percentage of oxygen in the air at sea level is the same at high altitudes -- roughly 21 percent. But because the air molecules are more dispersed, each breath delivers less oxygen to the body. When you take a breath at 12,000 feet (3,657.6 m), you're breathing in 40 percent less oxygen than at sea level. At 18,000, feet you're taking in 50 percent less oxygen. So during and shortly after physical activities (like mountain climbing or hiking), you should expect to feel short of breath at higher altitudes [source: Curtis].

At higher altitudes, our bodies make adjustments: creating more red blood cells to carry oxygen through the bloodstream, pushing air into normally unused portions of the lungs and producing citrate synthase, a special enzyme that helps the oxygen found in hemoglobin make its way into body tissue [source: Curtis]. High altitude also triggers an increase in our heartbeat, breathing and urination. The low humidity and low air pressure at high altitudes causes moisture from your skin and lungs to evaporate at a faster pace -- and your body's increased exertion requires even more water to keep it hydrated.

When your body loses fluid through its blood vessels, it tries to counteract the effect by holding water and sodium in its kidneys. As a result, even more fluid builds up in your body -- and more trickles out of your blood vessels [source: Mayo Clinic]. This fluid can get into body tissue and cause edema (swelling of the face, legs and feet). Edema is more common in women. There's no clear reason why, but researchers suspect it has something to do with their hormones and menstrual cycles. The condition isn't always an indicator of altitude sickness (it can occur from malnutrition and other illnesses at low altitudes), so it can be discounted as a precursor of altitude sickness if no other symptoms are present. While swelling may worsen with ascent, it usually resolves after descent.

If these are the basic effects high altitude has on your body, what are symptoms of altitude sickness? Next, we'll learn about Acute Mountain Sickness and why a hotdog-eating champion is no more susceptible to it than a marathon runner.