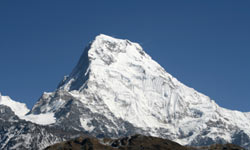 Annapurna is another massive peak in the Nepalese Himalayas.
iStockphoto/Thinkstock

Long before anyone stood on the summit of Mount Everest there was Annapurna, the 26,493 foot (8,075.07 meter) Himalayan peak in Nepal. First scaled by Maurice Herzog and an expedition of French climbers in 1950, Annapurna was the highest mountain anyone had ever climbed until Sir Edmund Hilary and Tenzing Norgay ascended Everest in 1953. Herzog and his team had no clue where they were going, and had to find their own route to the top. It took 20 years for another team to follow [source: Everest News].

There are actually six peaks in the Annapurna Range, including the towering Annapurna I. Annapurna is Sanskrit for "Goddess of the Harvests," and Annapurna I is the 10th largest mountain in the world. The best time to climb is between April and October. Not only is climbing any one of the peaks an adventure, but your trek will take you through many Nepalese villages, including several with whitewashed buildings and cobbled streets [sources: Visit Himalaya; Unearthing Asia].