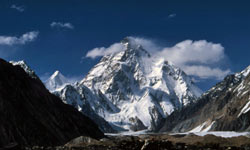 K2 is the second tallest mountain in the world, second only to Mt. Everest.
iStockphoto/Thinkstock

Known by the locals as Chogori, K2 is the second tallest mountain in the world, topping out at 28,251 feet (8,611 meters). K2 is not for the novice climber, and sometimes not even for the experienced. Located in the Karakoram Range between China and Pakistan, K2 is more difficult to climb than Mount Everest, the world's highest peak. While thousands have ascended Everest, only a few hundred have conquered K2 [source: Encyclopedia Britannica].

In fact, just getting to the base of the mountain is an adventure. Climbers have to drive around dangerous, narrow mountain roads and then hike eight days before arriving at the mountain. K2 is often plagued by falling rocks, avalanches and sudden storms, making it one of the most dangerous mountains on the planet to climb. In 2008, 11 climbers died on K2, including a 61-year-old grandfather making his third attempt to scale the monstrous peak [sources: Weir; Encyclopedia Britannica].

There are a number of climbing routes on K2, all but two beginning from the Pakistan side where basecamp is located. The Abruzzi Spur route, while considered the most dangerous, it is the most common and was first climbed by the Italians in 1954 [source: K2 Climbnet].

While you might be able to get fresh bread, vegetables and even beer from the villages near Everest, there are no big box stores near K2. Because K2 is so remote, getting what you need close to the mountain just isn't going to happen. Islamabad, which is more than 200 miles (321.87 kilometers) away, is not a great place to shop for gear. Bring all you can from home.