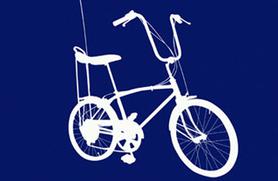 Is that a banana seat or are you just glad to see me?
Chad Baker/Getty Images

You don't need me to tell you that bicycles are good for the planet and good for your health. But what else do you know about the most energy-efficient vehicle ever created? From trivia to statistics, what's your Bike IQ? Whether you're bike savvy or still using training wheels, we've got a factoid for you.

1. The first human powered land vehicle was constructed by Giovanni Fontana in 1418.

2. The term "bicycle" first entered into popular usage in France in the 1860s.

3. The prototype of the mountain bike was not developed until 1977.

4. The longest "tandem" bike ever built was almost 67 feet long and could seat 35.

5. The smallest adult bicycle ever created had wheels made from silver dollars.

6. Unicycling is a mandatory subject at St. Helen's School in Newbury, Ohio.

7. Half of all the parts of a typical bicycle are in the chain.

8. The slow cycling record was set by Tsugunobu Mitsuishi of Japan in 1965 when he stayed stationary for 5 hours, 25 minutes.

9. The fastest speed ever recorded on a bicycle was attained by American Olympic Cyclist and Ironman triathlon competitor John Howard, when he reached 152.2 mph in 1985.

10. Lance Armstrong's heart is one-third larger than "normal." (Lance is also the seventh cousin of Katie Couric and sixth cousin of Hilary Duff.)

11. There are roughly one billion bicycles in the world (about twice as many as motor vehicles).

12. An estimated 130 million bicycles were produced worldwide in 2007 (more than twice the 52 million cars produced).

14. According to Transportation Alternatives, 10% of New York City's work force--approximately 65,000 humans--commute by bicycle.

15. A study found almost three-quarters of fatal crashes (74%) in NYC involved a head injury and nearly all bicyclists who died (97%) were not wearing a helmet. Helmets have been found to be 85% effective in preventing head injury.

16. From 1990 to 2005, only one fatal crash with a motor vehicle in NYC occurred when a bicyclist was in a marked bike lane.

17. Research has shown that tripling the number of bike riders on the street cuts motorist-bicyclist crashes in half.

18. How many bikes can be parked in a single car parking space in a paved lot? Anywhere from 6 to 20.

20. When Worldwatch Institute compared energy used per passenger-mile (calories), they found that a bicycle needed only 35 calories, whereas a car expended a whopping 1,860. Bus and trains fell about midway between, and walking still took 3 times as many calories as riding a bike the same distance.

21. Bicycles use 2% as much energy as cars per passenger-kilometer, and cost less than 3% as much to purchase.

22. Becoming a bicycle activist has never been easier.

(Some of the above facts were found at BikeWebsite, Trivia Library, and DidYouKnow.org)