How do I stay hydrated while mountain biking? 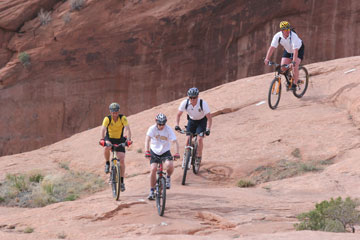 Extreme Sports Image Gallery It's important to drink water and sports drinks before, after and during a ride. See extreme sports pictures.
Photo courtesy of Utah.gov

A pro-grade mountain biking shoe might run a couple hundred bucks. You can pay more than $2,000 for a wheel. A good bike can cost well over $5,000. And a water bottle goes for about $5.

If cycling equipment were priced by importance, water bottles would cost more than the bike.

It's not the bottle, actually, but what's inside that any mountain biker (or any other type of athlete, or human being) can't live without. The human brain is 70 percent water, the lungs are 90 percent water, and the blood is 83 percent water [source: USGS]. Hydration is necessary for the distribution of oxygen and nutrients throughout the body, and it allows the body to cool itself by sweating. A dehydrated biker might use poor judgment, run out of energy and even get dizzy on a trail -- none of which makes for a good ride.

To maintain an optimum level of hydration, a mountain biker needs to drink water constantly, whether it's hot, cold, sunny or cloudy (although hot and sunny calls for the most water consumption). Every human body is different, but as a general guideline, 16 ounces before the ride, 20 ounces per hour during the ride and 16 ounces after the ride is a good minimum [source: PerformanceBicycle]. If there's a three-hour ride on the schedule, a couple of water bottles won't cut it -- they typically only hold up to 24 ounces each. In that case, you might want to strap on a hydration pack, which is basically a backpack that holds lots of water.

Caffeinated beverages, like soda, tea and coffee, as well as anything alcoholic, will sap your body of water. Before, during and immediately after a ride, stick to liquids that are caffeine- and alcohol-free. Energy or "sports" drinks are good, too -- they replenish electrolytes and calories to help keep you going during a particularly long trek. But they're an addition to the hydration regimen, not a substitute. Plain water is critical.

And it's cheap, so don't skimp on the most important piece of mountain-biking gear. Bring along some extra to keep in the car, and know where you can stop to refill along the route just in case. Running out of water is not an option.

For more information on mountain biking, sports hydration and related topics, look over the links on the next page.

How can fish bait spread disease?
How Personal Watercraft Work
How many triathlons can I race in a season?