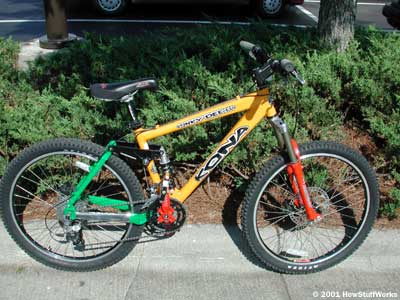 If you've been on a biking trail in the last few years, you've probably seen all kinds of crazy-looking bikes.

If you've read "How Bicycles Work," you already know the basics, so in this article we'll take a look at some of the new stuff on today's mountain bikes, including:

In this edition of HowStuffWorks, we'll take a look at all of this­ new high-tech gear. Let's start with the gears.

Mountain bikes just keep accumulating more gears. Today, some bikes have as many as 27 gear ratios. Mountain bikes use a combination of three different-sized sprockets in front and nine in back to produce these gear ratios.

The idea behind having all of these gears is to allow the rider to crank the pedals at a constant pace (cadence) no matter what kind of slope the bike is on. You can understand this idea by imagining a bike with just one gear. On this one-gear bike, each time you rotate the pedals one turn, the rear wheel would rotate one turn as well (a 1:1 gear ratio).

To go faster, you need a different ratio. For example, to ride downhill at 25 MPH (40 KPH) with a 50 RPM cadence at the pedals, you need about a 6.5:1 gear ratio. A bike with lots of gears gives you a large number of increments between a 1:1 gear ratio and a 6.5:1 gear ratio so that you can always pedal at about 50 RPM (or whatever cadence feels comfortable to you) no matter how fast the bike is going. 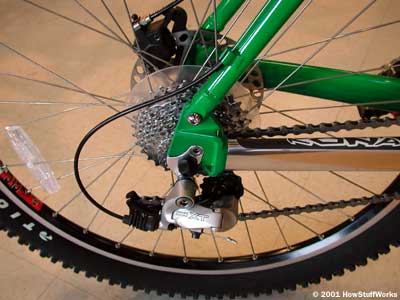 The derailleur is the device that changes gears by moving the chain from one sprocket to another. There are two derailleurs: one on the rear and one on the front. The highest ratio (when the bike can go fastest) is produced when the chain is on the biggest sprocket in the front and the smallest in back. The lowest ratio (the bike is easiest to pedal up hills, but very slow) is produced when the chain is on the smallest sprocket in front and the biggest in back.

Sprocket technology has improved the ability of bikes to shift under load. The sprocket in the picture above is one of the nine sprockets in the rear. Some of the teeth are shorter and wider than others -- these teeth grab the chain first during a shift and pull it up onto the sprocket. The sprocket also has "ramps," special grooves in the side that help pull the chain onto the sprocket.

Now let's see how all those gears are used. 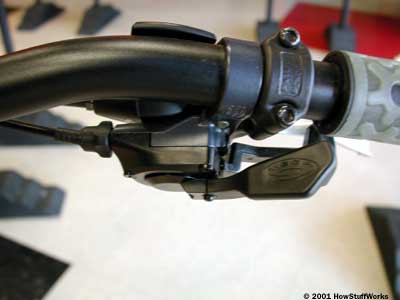 On a typical 27-speed mountain bike, about six of the gear ratios are so close to one another than you would never notice a difference between them. So why all the hoopla over more speeds?

In actual use, riders tend to choose a front sprocket suitable to the slope they're riding on and stick with it. The front sprocket is difficult to shift under load. It is much easier to shift between the gears on the rear. If riders are cranking up a hill, they'll probably chose the smallest sprocket on the front and shift between the nine gears that are available on the rear (since they can do this without easing off on the pedals). Having more speeds on the back sprocket can be advantageous.

The shifter design used on mountain bikes today recognizes that the point of shifting is to maintain a constant cadence. This means that most of the time you'll just be making small adjustments to the gear in order to increase or decrease your cadence. The front and rear shifters are equipped with switches that shift gears one at a time, either higher or lower.

Each shift lever adjusts a cable that determines the position of the derailleur. Both the front and rear derailleurs contain strong springs that force them to one side or the other. The shift lever either pulls against those springs to move the derailleur one way, or lets the springs pull the cable to move it the other way.

Now let's take a look at some mountain-bike suspension systems. 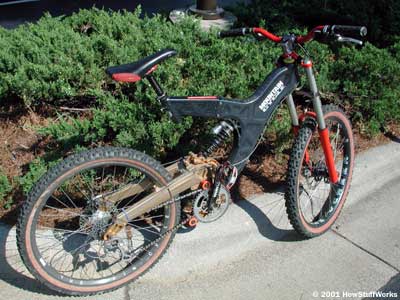 Many bikes today have both front and rear suspension systems. The suspension lets the wheels move up and down to absorb small bumps while keeping the tires in contact with the ground for better control. It also helps the rider and bike absorb large shocks when landing jumps.

Both the front and rear suspension systems contain two essential elements: a spring and a damper. Sometimes these components are collectively referred to as a shock absorber.

The spring allows the suspension to move up when the wheel encounters a bump, and to quickly move back down after the wheel passes the bump.

The spring can be a coil of steel, like most springs we're familiar with, or it could be a cylinder containing pressurized air. In either case, the further the spring it is compressed, the more force it takes to compress it, which is exactly what we need for a mountain-bike suspension. You don't want the spring bottoming out when you land a big jump.

Above, the damper in a mountain bike shock absorber. It pumps oil through small holes as the piston moves up and down.

If the suspension were equipped with just a spring, it would bounce up and down several times after each bump. When compressed by a bump, a suspension system needs a way to dissipate the energy that is stored in the spring. The damper is the device that dissipates the energy and keeps the suspension from bouncing out of control.

The most common type of damper is oil-filled. This type of damper is used in car suspensions as well as bike suspensions. When the shock absorber is compressed, a piston inside it forces oil to pass through a small hole, called an orifice. It takes energy to force the fluid to pass through the orifice, and this energy is converted to heat in the oil. The cool thing about oil-filled dampers is that they dissipate more energy and give more resistance to motion the faster you try to compress the shock absorber.

When the shock absorber compresses faster, a greater volume of fluid has to flow through the orifice, so more pressure is required to force the fluid through. This increased flow does two things: It increases the stiffness of the suspension (because the pressure resists the motion of the shock absorber), and it dissipates more energy.

Designing a good shock absorber is partially about finding the best balance between the spring rate (the stiffness of the spring) and the damping. For this reason, many shock absorbers have adjustable spring rates and damping. Some compressed-air springs can be adjusted by increasing or decreasing the air pressure.

Now let's see how the damper is incorporated into a mountain-bike suspension.

The bottom part of the fork, which holds the wheel, fits over the tubes that connect the fork to the frame. Inside each tube on the fork is a shock similar to the one in the diagram we saw earlier. When the fork moves up (when the bike hits a bump), the spring gets compressed and the piston forces fluid through the orifice.

There are as many different rear-suspension designs as there are bicycle makers. Most of them use a shock absorber similar to the one in our diagram, sometimes with a larger coil spring. It is mostly the design of the frame and the linkage that makes one bike different from another.

Some bikes have a rear suspension like a motorcycle.

The rear suspensions usually need bigger springs because the linkage gives the wheel a mechanical advantage over the spring. The rear wheel might have to move 3 inches (7.62 cm) for the spring and shock to be compressed 1 inch (2.54 cm). This means that the force on the shock is three times the force on the tire. In the front, there are two shock absorbers, and the force on each shock is half the force pushing on the tire. 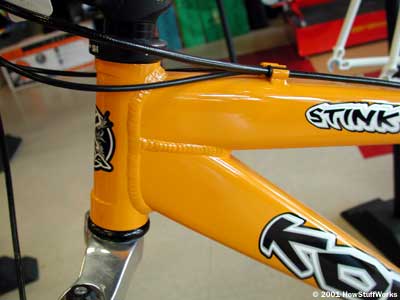 Front and rear suspensions have enabled riders to subject their bikes (and themselves) to incredible abuse. There are high-speed races down mountains strewn with rocks, fallen trees and gullies.

The increased abuse and rear-suspension systems and have placed additional stress on the frames of mountain bikes. Frames constructed simply by welding together steel or aluminum tubing are quickly being replaced by more complicated structures.

The round tube is not the most efficient shape of tubing for use in bike frames. A round tube is equally strong in side-to-side and up-and-down bending, but the stresses in frames tend to be more in the up-and-down direction and less in the side-to-side. The rectangular beams and joists used in building your house can support lots of up-and-down weight without bending much, but if you turn them on their side they can barely support any weight at all.

If the frame is made using shapes that are more rectangular, taller than they are wide, you can gain strength in the up-and-down direction, sacrificing a little side-to-side strength that you didn't need anyway.

The main section of the frame on this downhill racing bike is made by welding two stamped aluminum pieces back to back.

Making these more complicated shapes required some advances in material-forming technology. Some of these pieces are made by hydroforming the metal. This is a process whereby sheets or tubes of metal are placed inside strong dies (kind of like molds) and then pressurized with water. The pressure of the water forces the metal to conform to the shape of the die. This technique allows for the formation of complex metal shapes.

Some bike frames are constructed from carbon fiber. This is a material that is built up in sheets over foam forms. Sheets of carbon-fiber cloth are placed over the foam forms and epoxied in place. The result is a very light, strong structure that can have almost any shape.

These non-circular-section frame structures make certain rear-suspension designs possible. One example is the motorcycle-style suspensions that have no vertical tubes tying them into the frame.

A suspension like the one in the picture above makes it difficult to find a place to mount conventional brakes. That's one of the reasons why some bikes have been using disc brakes, as we'll see in the next section. 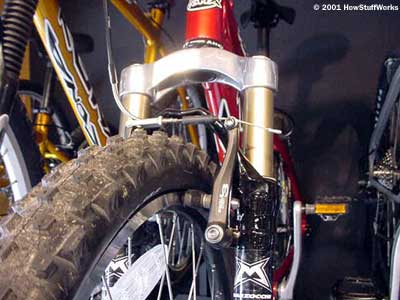 The brakes on mountain bikes have evolved over the years. The predominant design is a variation of the cantilever brakes found on most bikes.

A cable running from a lever on the handlebars pulls the two levers on the brakes together. This squeezes the brake pads against the outside of the wheel.

Some bikes, especially those with suspension systems, use disc brakes. These work just like the disc brakes on a car.

The brake lever uses hydraulic fluid to transmit the force from your hand to the brake shoes. The handle presses a small piston that applies pressure to the fluid in the line. At the wheels, a larger piston squeezes the pads onto the disc. Since this piston is larger, the force is multiplied at the wheels. (See a diagram and learn more details about hydraulic force multiplication.)

The handle contains a small device that works something like the master cylinder in your car brakes. It makes sure that there is enough fluid in the reservoir that if the pads wear, or the fluid expands or contracts (as it does when heated or cooled), there will still be enough fluid in the system to actuate the brakes.