Are Kevlar mountain bike tires worth the cost?

Browse the article Are Kevlar mountain bike tires worth the cost? 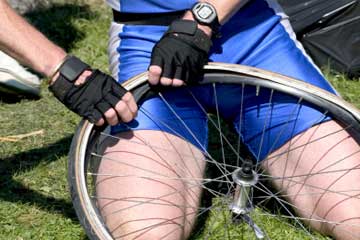 The durability of Kevlar subtreads is intended to prevent mountain bikers from having flat tires to change as often as with a standard tire.
©iStockphoto.com/Paul Gardner

When you ride over rocks, debris and especially broken glass on your mountain bike, these items can pierce the tire and puncture the tube inside. A punctured tube equals a flat tire, meaning you've got to stop your ride, break out your tool kit and your spare tube (given that you have these items) and go about replacing or repairing the tube. Mountain bikers who ride regularly can get a flat as often as every week.

Then along comes the Kevlar tire. Kevlar is a synthetic fiber that is about five times stronger than steel. Kevlar is used in tires in one of two ways: as a replacement for the steel coils that form the tire's edges (known as beads), or as sub-tread, which is a protective layer that rests between the external rubber and the internal fabric casing that forms the tire's structure. When the beads are made of Kevlar, the tires are lighter (by around 2 ounces or 56 grams each) and the tire can be folded up easily, something that can't be done with a regular tire. When the casing or sidewalls include Kevlar, there is some added weight and a somewhat more rigid ride, but often these tires can go a year or more without a flat because of Kevlar's ability to deflect glass and other sharp objects and defend the tube against puncture.

Regular tires for mountain bikes generally run from $20 to $45. Tires using Kevlar generally can cost between $50 and $85, though knock-off brands sold at large chain stores can be considerably cheaper (in both cost and quality). Tubes cost between $5 and $20. That probably doesn't sound like much, but it adds up quickly if you're replacing three or four tubes each month.

Although not everyone is sold on the merits of Kevlar tires -- some people still experience flats when using Kevlar tires, whereas other go years without a single flat -- overall they seem to be a much sturdier tire and a much better value in the long run.

If you're just starting out with your first mountain bike, try riding with a regular tire to learn the basics of tire care, such as how to replace or patch a tube. When that gets old, you might want to crack the piggy bank and treat yourself to some Kevlar tires, which are generally worth the extra cost.