How to Repair a Bicycle

How to Replace a Bicycle Spoke 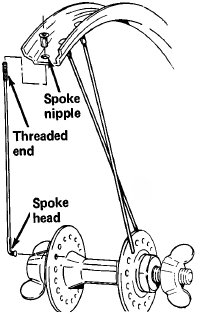 Insert the spoke head into the hub; insert the threaded end through the wheel rim and screw the spoke nipple on.

A broken or bent wheel spoke can cause further problems with your bike, but replacing it is easy.

Set the bicycle upside down and prop it firmly in place. Using an adjustable wrench, loosen the nuts that hold the wheel in place; remove the wheel. Let the air out of the tire. Remove the tire from the wheel by hand, if possible; or use tire irons to work the tire over the rim. Starting at a spoke, carefully insert the plain end of a tire iron between the rim and the tire. Holding that end in place, pull the slotted end down and behind the spoke, and hook the slot over the spoke. Insert a second tire iron at the next spoke; repeat, moving the irons alternately around the rim, until you can work the tire off by hand. Then remove both tire and tube.

Once the tire has been removed, you're ready to replace the damaged spoke. On most bikes, the heads of the nipples that hold the wheel spokes in place are covered by a large rubber band. Pull this band over the rim and remove it. If the broken spoke has fallen out of the wheel, examine the wheel to find the empty hole where the new spoke will go. If the old spoke is still in the wheel, cut it off at both ends with wire cutters. Remove any pieces of old spoke left in the wheel rim or the hub.

The new spoke must be exactly the same length and diameter as the old one. To make sure you get the right size, either take the whole wheel to the bike shop or remove a good spoke from the same side to measure by. Don't accept any differences in either length or diameter.

To make the repair, insert the head of the spoke, the end that doesn't have a nipple, into the empty hole in the hub. The spoke head should curve away from the hub. You may have to bend the spoke slightly to get it into place, but don't bend it sharply.

When the spoke is in place, insert the nipple through the hole in the wheel rim and thread it carefully onto the end of the spoke. Hand-tighten the nipple; don't use the spoke wrench yet.

Tighten or loosen the new spoke to align the wheel properly; it should spin freely and evenly.

After you've aligned the tire, check the new spoke to make sure it doesn't stick out through the rim end of the nipple. If necessary, file it flat. Finally, replace the rubber band over the spoke nipples, replace the tube and tire, and pump the tire full.

For tips on caring for and repairing other types of sports equipment, try the following links: