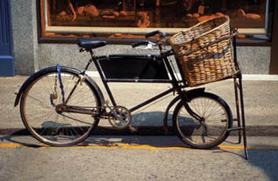 I know that a lot of Planet Green readers are cyclists (no big surprise, the bicycle is still the greenest way to get around), and this probably means that some of you are curious about fixed gear bicycles. Let's look at some of the benefits and disadvantage of these minimalistic (so would even say elegant) bikes.

What is a Fixed Gear Bike?

A fixed gear bicycle doesn't have a freewheel (don't worry, they're not all as weird-looking as the one in the picture that illustrates this post - I just couldn't resist that funny-looking basket). This means that when the rear wheel turns, the pedals turn. The rear sprocket is screwed directly into the rear wheel's hub, so there's no way around it.

This means that, for example, you can't just coast down a hill without moving you feet. You have to turn the pedals at the same rate as the rear wheel is turning at all times! This isn't a minor difference, it's a big deal. Some people hate it, but some cyclists swear by it (especially bike messengers).

The main downsides of fixed gear bikes are that these types of bicycles are not adapted to all riding conditions. If you are riding somewhere with lots of hills, you might find yourself missing your gears are freewheel pretty quickly!

It's also harder on the knees. Up to a point it can probably help you build stronger legs and knees, but you could still get part of that benefit by learning good pedaling technique on a regular bike and avoid the extra wear & tear.

Also, something important to remember: If you're braking with the rear wheel, you're not getting maximum braking power because during deceleration, weight is transferred to the front wheel. This is another reason why it's important to have brakes on a fixie.

But the best way to find out of a fixed gear bicycle is right for you is to try one. Just make sure you do it in a safe environment; you don't want to go riding in traffic the first time you try a fixie...