Browse the article How Bicycles Work 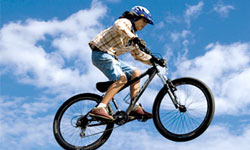 Lawrence Lawry/Getty Images
Bicycles are more than a mode of transportation -- they are a lot of fun. See more extreme sports pictures.

Bicycl­es are simple and beautifully elegant machine­s that attract just about every kid at an early age, working their wa­y up from tricycles and training wheels.

The coolest thing about a bicycle is that it lets you get where you are going a­ lot faster and using a lot less energy than if you were walkin­g or running.

Another neat thing about bicycles for anyone interested in machines and mechanics is that everything is completely exposed. There are no covers or sheet metal hiding ­any of the working parts that propel you down the road -- on a bicycle, it is all out in the open. Many kids with mechanical tendencies can't resist the desire to break out the tool set and take their bike apart!

In this article, we will look at all of the different parts of a bicycle so that you can completely understand how this machine works!

In order to talk about bicycles, it's good to start by naming all of the parts. Here's a picture of a typical bicycle:


Bicycles are made of just a few parts that you can immediately see and identify. The core is the frame. A bicycle's frame is made of metal tubes welded together. Each tube has a name, as shown here:


That is all there is to a bicycle!

The bearings in the fork tube are typical and are shown in the following figure:


The ball bearings (yellow) ride in a cup (red). The cones (dark blue) screw onto the light blue tube that is attached to the fork. The cones are adjusted to be tight enough that there is no play in the fork, but not so tight that they squeeze the ball bearings and cause them to bind. The wheel hubs and pedals work exactly the same way, with the cones providing the adjustment. In the crank axle, one of the cups provides the adjustment instead of the cones. A little bit of grease in the bearings makes them even smoother.

Periodically, you have to disassemble the bearings on a bicycle to clean out the dirt and put in fresh grease. Some more expensive bicycles have sealed bearing cartridges that never need adjustment or lubrication.

You have probably seen a picture of the funny-looking "penny-farthing" or "high-wheeler" bicycles -- the ones with a huge front wheel and a tiny rear wheel. You might even have seen someone riding one in a parade or in a movie. These bicycles became popular starting in 1870, but by the turn of the century were replaced by the "safety bicycle." A bicycle from 1900 or 1910 looks almost exactly like any bicycle you see today. Today's bicycles have two wheels of the same reasonable size, a pair of pedals in the middle of the bike and then a chain that connects the pedals to the rear wheel.

So why did penny-farthing bicycles ever exist? In a penny-farthing bicycle, the pedals and the front wheel are directly connected just like they are on a kid's tricycle. That means that when you turn the pedals one time, the wheel goes around one time. That's an inexpensive way to build a bicycle, but it has a problem. Think about a kid's tricycle. The front wheel might be 16 inches (40 cm) in diameter, or 16 * 3.14 = 50 inches (127 cm) in circumference. That means that each time a kid on a tricycle pedals through one revolution of the front wheel, the tricycle moves forward 50 inches (127 cm). Let's say that the kid is turning the front wheel at 60 rpm, or one revolution per second. That means that the tricycle is moving forward 50 inches per second. That is only 2.8 miles per hour (4.5 kph). If the kid pedals twice as fast, at 120 rpm, the trike is moving at just over 5 miles per hour (9 kph), and the kid looks like his legs are about to spin off because 120 rpm is a lot of pedaling!

The first thing that causes bicycles to have gears is the fact that gears can reduce the wheel size from 7 feet in diameter to something reasonable. As described in the article How Gears Work, gears and gear ratios are a good solution to this problem. For example, if you put a gear with 42 teeth on the front chain wheel and a smaller gear with 14 teeth on the rear wheel, you have a 3-to-1 gear ratio. Now the back wheel can be 84 inches / 3 = 28 inches (71 cm) in diameter -- about the size of a normal bicycle wheel. This is a much safer approach.

The gears at the front are called the chain wheels. Most bikes have two or three chain wheels that look like this:


Attached to the rear wheel is the freewheel, which looks like this:


The freewheel has between five and nine gears on it, depending on the bike. A freewheel spins freely in one direction and locks in the other. That allows the rider to either pedal or not pedal -- when not pedaling, the bike coasts (another feature that tricycles and penny-farthing bicycles lack).


The rear derailleur has two small cogs on it that both spin freely. The purpose of the arm and lower cog of the derailleur is to tension the chain. The cog and arm are connected to a spring so that the cog pulls backward at all times. As you change gears, you will notice that the angle of the arm changes to take up or let out slack:


The top cog is very close to the freewheel. When you adjust the gears with the lever on the handlebar, this cog moves to a different position on the freewheel and drags the chain with it.


The chain naturally slips from one gear to the next as you turn the pedals.

Everything about a bicycle is simple. That's what makes it such a great machine to ride -- and also a great mechanical work of art! For more information on bicycles and related topics, check out the links on the next page.