Do I have to use film for wildlife photos? 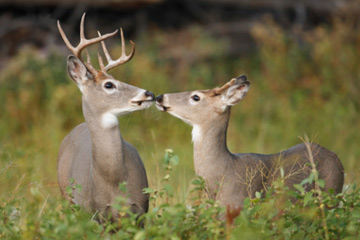 Image Gallery: Mammals You only have a split second to get a great shot in the wild. See more pictures of mammals.
Paul E. Tessier/Photodisc/Getty Images

Have you ever wanted to be like Dr. Doolittle? The character, who first appeared in children's books in the 1920s, could speak with animals in their own tongue. Many people go their entire lives without even seeing the exotic animals depicted in storybooks like the ones featuring Dr. Doolittle. A lucky few, however, get to commune with nature by going on a wildlife expedition.

A vacation devoted entirely to seeing animals in their natural habitat is a once-in-a-lifetime experience. Whether you're headed for the rainforest or going on an African safari, following kangaroos and koalas or tracking elephants and lions, the experience promises to be awe-inspiring. While spying on a bear or gazing at a giraffe is likely to be unforgettable to your inner Doolittle, that doesn't mean you won't want photographic proof of that magical moment. That's why the first thing people consider after booking their trip is what camera they'll take.

Though many people now carry digital cameras in their pockets, ready for use at a moment's notice, there has long been a belief that such devices are inferior for wildlife photography. Capturing an animal in the wild, after all, can be tricky, and a great shot can disappear in less than a second. That's why most wildlife photographers have been forced to lug camera bags full of film and lenses on their expeditions. But in recent years, digital cameras have become more technologically advanced -- does that mean they're wildlife ready? Dr. Doolittle could tell an animal to stay still for a great shot, but if you can't tell an animal to say "cheese," what camera should you have in your hand? 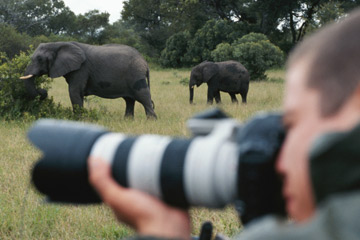 Elephants never forget, and thanks to these photos, you won't either.
David De Lossy/Digital Vision/Getty Images

Film has long been the medium of choice for wildlife photographers. But just because it's the way things have always been done, does that still mean it's the right way?

When you buy any camera, you'll want to think about what kinds of lenses you want. Sophisticated zoom features and interchangeable lenses are two factors that can differentiate digital pictures and those taken on film. With a good digital camera, though, the only person who may be able to detect such a difference in quality would be a professional. At minimum, a photographer using a camera with film may need a 35 mm camera with a normal zoom lens (28 - 105 mm) and a telephoto lens (70 - 300 mm) [sources: Alaska Outdoor Journal; Fairlie; Hill].

Photographers should also stock up on films of various speeds to ensure a great picture no matter the shooting conditions. Film speed measures a film's sensitivity to light. "Fast" film speeds, for example, are highly sensitive and don't require much exposure to produce an image. A "slow" film speed, on the other hand, would need a longer exposure time to produce the same image. Low-speed films, such as 100 or 200 speed, are best used in bright light and when the subject is stationary, such as a crocodile sunning itself on a rock. When you're shooting more active animals, or when you're shooting at night, you can then reach for a high-speed film like 400 or 800. These films are better for action shots, because the shutter closes more quickly after you take the picture, framing the subject at the exact moment you want to capture; digital users can alter shutter speed with the push of a few buttons.

If you're using high-quality film, then each picture can get fairly expensive. You can't shoot and shoot the way you can with a digital camera, unless you're willing to make a hefty investment in film and developing. Of course, it's possible that such a constraint may end up creating better pictures, as you'll take your time with each one, making sure it's perfect before you click.

One huge disadvantage of film is that you won't know if all your fancy equipment did its work until you get home and develop the film. That's one reason why people are turning to digital. 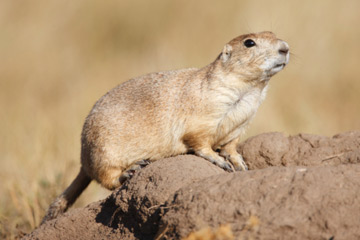 "Please, I prefer to be shot on my good side."
Paul Tessier/Photodisc/Getty Images

Digital cameras have become so advanced that they're now being used in wildlife photography. One enormous benefit of using a digital camera is that you get instant feedback on how a photograph turned out. If you didn't get your shot of a tiger just right, then you can try again and again. If you're not very experienced with cameras, that peace of mind can be very assuring when you're on an expensive trip.

When you're looking for a digital camera to use to take wildlife pictures, don't assume that more megapixels is better. A camera with three to five megapixel capacity should be adequate [source: Vantassel]. Just as important as megapixel count are factors like autofocus, shutter speed and the photographer's ability to process the pictures after they're taken in terms of color, tone and vibration reduction. Don't think that a digital camera necessarily saves time -- you will likely spend as many hours converting and editing photos as you would if you were processing film [source: Wiggett].

While you don't have to lug around rolls of film in the wild if you're using a digital camera, you will still need to stock up on batteries and storage space. If you're taking a lot of photos, you may even need to lug around a laptop so that you can upload your pictures each night.

As it turns out, there's no right or wrong camera or method for wildlife photography. All you need is a durable camera able to withstand tough elements and a working knowledge of how your camera works. After all, there's no sense buying a fancy camera, be it film or digital, if you don't know your autofocus from your shutter speed. Experiment with cameras of both types, and you'll find the one that's perfect to capture pandas, wallabies, rhinos and all the friends you'll meet out in the wild.