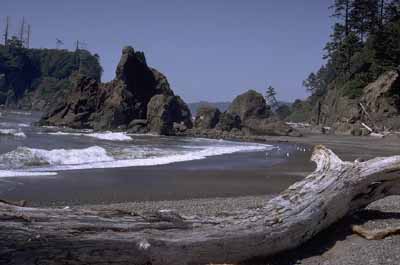 Olympic National Park -- located in northwestern Washington, about 90 miles from Seattle -- contains jagged mountains, glaciers, lush rain forests, and beaches that are covered with driftwood. These diverse offerings attract nature lovers from around the world. In addition to viewing the surroundings, visitors can partake in a number of activities, including boating, fishing, and water sports.

Accommodations: Some of the park's 16 campgrounds are open year-round. Most operate on a first-come, first-served basis, but some reservations are available (800-365-CAMP).

Come to Olympic National Park, and you enter an enchanted forest, a luminous world suffused with a soft green light reflected and refracted by trees garlanded with club moss and lush growths of ferns and oxalis.

There, in Washington's Hoh Rain Forest, western hemlock, Sitka spruce, and western red cedars, some with diameters of 25 feet, tower 300 feet above you. These ancient giants, standing on enormous roots called stilts, form great colonnades with inviting, winding side aisles that look like green tunnels leading to another world.

A jumble of undergrowth spreads out far below the forest canopy in the national park on the Olympic Peninsula, located in the extreme northwest corner of Washington. Seedlings that would have been unable to compete with other plants on the forest floor sprout exuberantly on fallen trees, called nurse logs.

From these rotting logs, some saplings may grow into the world's largest specimens of Douglas fir and western hemlock. The undergrowth is luxuriant and abundant, but it is not impenetrable because its growth is kept in check by the foraging of the park's most famous inhabitant, the Roosevelt elk.

Olympic is the most diverse national park. Along with the Hoh and two other rain forests, the park contains two more equally distinct ecosystems: a rugged wilderness seacoast, with stunning headlands and lovely beaches covered with driftwood, and the Olympic Mountains, a rugged range of high alpine meadows, great jagged ridges, and glaciers.

Because of this remarkably diverse landscape, climatic changes within the park are abrupt. The western side of the park has the wettest weather in the United States, averaging nearly 12 to 14 feet of precipitation each year. The eastern side of the park, which lies in the rain shadow of the mountains, is the driest area on the Pacific Coast north of Los Angeles.

Olympic National Park's diverse landscape offers equally diverse activities and sightseeing opportunities for visitors. On the next page, learn about the many things to see and do in this park. 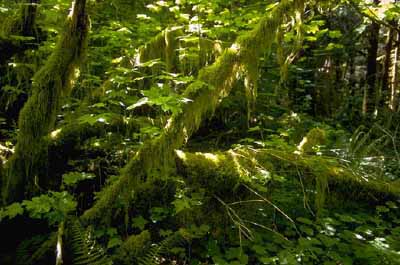 The Olympic mountains -- the heart of Olympic National Park -- are a wilderness range that is nearly circular. The mountains are penetrated by 13 rivers that radiate out from their center like the spokes of a wheel. The highlands are up-and-down country, where the peaks and ridges are separated by deep valleys and canyons cut by the rivers.

Olympic National Park is full of mountain vistas and scenic landscapes that are perfect for photographers. If you're hoping to snap a few shots while visiting the park, here are some vantage points to consider:

The Rain Forests of Olympic National ParkOlympic's three rain forests, with trees and vegetation as lush as an Amazon jungle, may be the strangest and most fascinating sections of this unusual park.

The richness of these forests exists only because certain conditions are met: Moisture must be incredibly plentiful, and even when it is not raining, the air needs to be humid and misty. And the temperature must be mild, neither too hot nor too cold.

The proximity of the Pacific Ocean helps fulfill these requirements for the Olympic forests. The steep rise of the inland mountains forces Pacific storm clouds to ascend and release their moisture as heavy rainfall. This moisture is then concentrated in long river valleys, which also extend moderate, sea-level temperatures deep inland.

This unique combination of weather and topographical conditions perpetuates the life cycle of these forests. After a tree falls, it can become a nurse log for new seedlings. Bacteria and fungi slowly break down the fibers of the fallen log, which becomes covered by mosses and lichens. This surface is rich in nutrients and allows seeds to germinate and sprout. After a seedling takes root, a young sapling grows. Over time the nurse log rots completely away, leaving a tree standing tall on its stiltlike roots.

Modern-day visitors marvel at Olympic's rain forests and mountains. In the next section, we'll tell you how this landscape was formed.

History: How the Olympic Mountains Were Formed 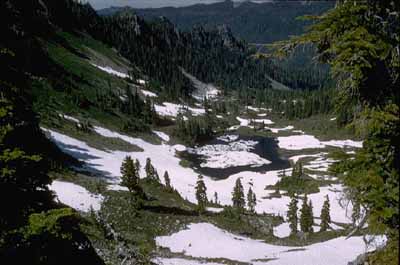 Geologists believe that the rock of the Olympic Mountains developed beneath the sea because marine fossils are found near the summits. Around 35 million years ago, the great plate carrying the floor of the Pacific Ocean collided with the North American plate. The upper levels of the seabed plate rose up and crumpled into the Olympic Mountains. Later, glaciers, wind, and water shaped the mountains into what we see today: breathtaking vistas of deep canyons, towering mountain ridges, and meadows dense with wildflowers.

The History of the Olympic Mountains: Inhabitants and Exploration

In 1788, an English sea captain named John Mears sighted the peninsula's tallest mountain, which at 7,965 feet is not an extremely high peak, but it rises so dramatically above the sea that it looks enormous. Mears was so overwhelmed by the sight that he named the peak Mount Olympus in honor of the home of the Greek gods.

In the 1890s, local residents tried to block a proposal for federal protection of thousands of acres of timber that would restrict the area's huge logging industry. But since 1897 the territory has been under the jurisdiction of either the Department of Interior or the Department of Agriculture. For 29 years it was Mount Olympus National Monument, but the name was changed when the national park was established in 1938.

Today visitors flock to the park to experience its rich lanscape. And at the center of it all stands mighty Mount Olympus.