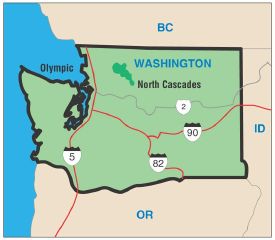 If you like glaciers, you'll love North Cascades National Park in northern Washington. This park -- located about 90 minutes north of Seattle by car -- contains more than 300 glaciers. Visitors to this park enjoy hiking, fishing, hunting, and boating amidst the beautiful landscape. In the park's Stehekin Valley, visitors can wilderness camp without having to backpack in, thanks to a shuttle that carries campers to and from the site.

Other services: An information center, a ranger station, two lodges, and seven campgrounds

With the last light, the sun slips below the Pacific horizon and bathes the high mountains in a pink glow that warms their soaring, glacier-scoured peaks, ragged ridges, and cloud-piercing spires. These are the North Cascades, the heart of a mighty range that begins in Canada and penetrates far south into the United States. This is a land of mountains and ice. More than 300 glaciers are concentrated in Washington's North Cascades National Park -- many more than can be found anywhere else in the United States south of Alaska.

The looming presence of mountains also defines this park. Here you will find soaring, glacier-scoured peaks, spires that pierce the clouds, ragged ridges, alpine tarns, and flower-bedazzled meadows in cirques below the mountain summits. On the flanks of the mountains, forests of fir and pine surround tranquil lakes and deep glacial valleys.

North Cascades National Park is also a land of special sounds. On warm days, you can hear the booming crack of sloughing ice and the thunderous roar of avalanches. When the weather is bad, thunder blasts up the valleys and circles around the peaks, while the wind rushes between the mountains and ridges, and down the slopes of glaciers. And always, in this mountain range that was named for its innumerable cascading waterfalls, there is the sound of falling water.

The mountains themselves create another kind of division within the park. Moist prevailing winds blow in from Puget Sound and the Strait of Juan de Fuca. Flowing up the western slopes and cooling as they rise, the moist winds condense into rain and snow. The west side of the park is covered by lush green forests of Douglas fir, western red cedar, and hemlock, which grow to towering heights because the trees receive more than 100 inches of precipitation a year.

By contrast, the eastern slope of the mountains, lying in the rain shadow of the great peaks, receives on average only a little more than 30 inches of precipitation a year. Douglas firs on the east side of the mountains reach only half the height of firs on the western slope. Moisture-loving hemlocks do not grow here at all; instead the eastern slopes foster trees that tolerate dryness, such as ponderosa and other pine trees.

The beautiful wilderness of North Cascades National Park provides many activities for visitors. On the next page, we'll talk about sightseeing opportunities in the North Cascades. 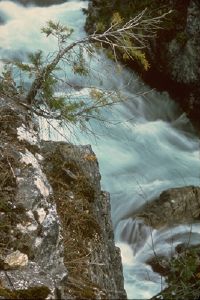 ©2006 National Park Services The Cascade Range takes its name from the many waterfalls scattered throughout the mountains.

The peaks of the North Cascades are so rugged and vertical that these mountains are sometimes called the American Alps. Like the European Alps, North Cascades National Park attracts scores of mountaineers, hikers, and backpackers.

In 1814, trapper Alexander Ross wrote of this rugged terrain: "A more difficult route to travel never fell to man's lot." The names of some of the mountains in the region attest to the hardships they imposed on early trappers and prospectors: Damnation Peak, Mount Despair, Mount Fury, Forbidden Peak, and Desolation Peak.

Stehekin Valley is a glacial-carved defile of magical scenery in the south end of North Cascades National Park. It has been a mecca for visitors seeking a mountain hideaway since the turn of the century.

One of the valley's most unusual options is wilderness camping without backpacking: Shuttle buses take campers to one of several backcountry areas where overnight camping is permitted.

In North Cascades National Park, there are numerous sites of historic interest and natural beauty that attract the attention of landscape photographers. If you're hoping to snap some pictures while visiting the park, here are some spots to consider:

Hiking to Cascade Pass There is only one paved road that runs all the way through the park, the North Cascades Highway. As the road climbs higher and higher, the landscape changes from alder forests to huge groves of towering Douglas firs, then to forests of pine, larch, and hemlock, and finally, flowering alpine meadows and a high windy pass. From this point, hikers can set off on an old trail to 5,384-foot Cascade Pass atop a ridge covered with alpine meadows.

In the high meadows, black-tailed and mule deer graze; black bears look for huckleberries, which they rake into their mouths, vine and all, with their claws; and stout marmots sunbathe on rocks. Some lucky visitors catch a glimpse of mountain goats clambering on high rocky crags.

They rely on soft cupped pads on their hoofs to give them their incredible traction. Throughout the park roam bobcats, which you will seldom see, and secretive mountain lions. Sleek and tawny, these big cats prey on deer and other mammals, helping to keep the wildlife population in balance.

The North Cascades region has been inhabited for at least 8,000 years. On the next page, you'll learn about the history of these mountains and valleys.

The History of the North Cascades 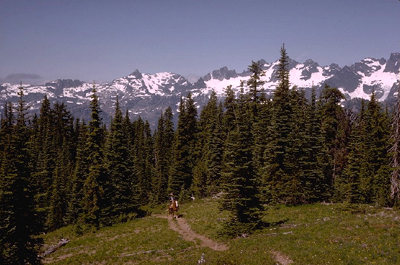 ©2006 National Park Services The mountains and valleys of North Cascades National Park have attracted explorers, hunters, and homesteaders for the past 8,000 years.

The North Cascades are a topographic jumble, consisting of two national park units (North and South), as well as two national recreation areas (Ross Lake and Lake Chelan). All four are administered by the National Park Service. A road through the Ross Lake area, which was completed in 1972, divides the North and South units and makes the alpine wonderland of the park readily accessible.

Native Americans first lived in this region at least 8,000 years ago. In the Newhalem River area, tribes supported themselves through fishing, hunting, and gathering. High-altitude archeological sites have yielded many stone tools and other artifacts from these early inhabitants.

More recently, 19th century European and American fur traders and explorers hunted and trapped in this mountain range. Miners and homesteaders followed, making a permanent home for themselves in the North Cascades.

The little community of Stehekin lies on the shore of Lake Chelan, which extends south for 55 miles and in some places is 1,500 feet deep. The town of Stehekin was staked out by 19th century prospectors, and its one-room school house was used until 1988.

The valley offers a fascinating look into the history of the North Cascades. The Buckner Homestead gives visitors a sense of the hardships as well as the joys of life on the frontier. Elsewhere there are several mines that can still be explored. Gold, silver, and copper drew hordes of prospectors to this area more than a century ago.

The rugged terrain of the North Cascades that so challenged 19th century explorers calls out to modern-day hikers and adventure-seekers. Visitors today come to test themselves against this rocky and beautiful landscape.