Dangers of the Nile River 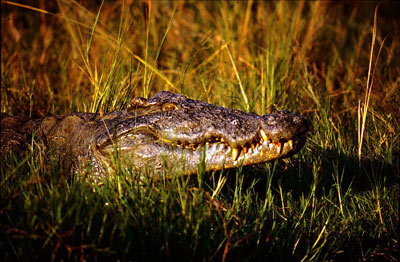 A crocodile lurks amid the rushes along the Nile at Murchison Falls in Uganda.
Ernst Haas/Ernst Haas/Getty Images

One of the most daunting possibilities when touring the Nile River is the prospect of coming face to snout with a Nile crocodile. Nile crocodiles typically eat fish, although they're known to deviate from that menu. In fact, they're blamed for the deaths of roughly 200 humans every year [source: National Geographic]. Th­e vicious animal tops out around 20 feet (6 meters) long and 1,650 pounds (748.4 kg). The animal isn't completely heartless, though. They're extremely attentive and caring parents to their eggs and young, unlike many other reptiles who lay eggs and leave them to fend for themselves.

Hunters nearly caused Nile crocodiles to become extinct by the 1960s, but the species has made a comeback thanks to protection efforts. One crocodile in particular continues to terrorize the people who live along the Rusizi River in Burundi. "Gustave," as locals know him, is credited with the deaths of hundreds of people. The cunning reptile is still on the loose. Gustave tracking enthusiast Patrick Faye claims that his long tenure of terror is a direct result of political and so­cial unrest in the area. According to Faye, the powers that be of the area simply have more important concerns, so for the time being, finding Gustave isn't a priority.

Crocodiles no longer have to share paddling space with hippopotami in the Egyptian portion of the Nile. The hippopotamus is actually native to the area, going far back enough to have been worshipped by Ancient Egyptians. Despite a wide reputation as cute, loveable creatures, the typical hippopotamus is actually quite ferocious and destructive, often known for turning fishing boats upside down and destroying crops.

The Ancient Egyptians believed the animal possessed spiritual powers, in addition to its obvious physical strength. Because of this, the animal became well-represented in Egyptian religion and art. The animal no longer lives in Egypt, although its legacy as a fearsome, destructive creature is unmistakable in the area. Hippos currently call southern sub-Saharan Africa and east central Africa home.

Although they may be tiny, mosquitoes pose a very real threat to residents and visitors to the Nile River area. According to the national Centers for Disease Control and Prevention (CDC), malaria is a very small risk in the highly populated and toured areas of Egypt, so travelers to the region aren't even required to get the malaria vaccine before travel. Mosquitoes and other bugs do still pose other threats, however.

People are another potential hindrance to travelers in the Nile River area. As already mentioned, political and social upheaval have left some areas of Africa in a tumultuous state. In fact, the expedition that determined the ultimate source of the river encountered much hostility in northern Uganda, an area torn apart by war. Ugandan rebels shot one member of the expedition team to death, while the others narrowly escaped.­

The CDC considers the risk of malaria to be low enough in North Africa that travelers aren't required to be vaccinated before traveling there. However, malaria isn't the only threat to visitors. The CDC recommends that travelers to the area take along anti-diarrhea medication, iodine tablets and water filters to purify drinking water, and antibacterial hand wipes or alcohol-based hand sanitizer.