The Nile's Impact on Ancient Egypt 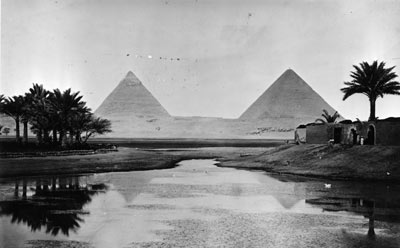 Circa 1900: The pyramids at Giza on the banks of the River Nile, built by the ancient Egyptians to house the bodies of their pharaohs.
Hulton Archive/Getty Images

Although m­ost historians and geographers find it difficult to agree on many aspects of the Nile, including its length and source, virtually everyone acknowledges that Ancient Egypt could never have existed without the great body of water. Egypt, known to many as the home of the Great Pyramids, the Great Sphinx and other marvels of the ancient world, isn't ideally located for advanced civilization. Other than the Nile, Egypt is surrounded by tons of sand, which isn't exactly conducive to agriculture and other cornerstones of civilization. Fortunately for the Egyptians, they knew just how to finesse the Nile and its capabilities to turn what would appear to be a barren wasteland into a thriving empire.

A consistent freak act of nature allowed the Egyptians to harness the capabilities of the Nile River. While the majority of Egypt was and still is covered with the aforementioned sand, the river basin next to the Nile boasts wildlife and fertile soils. This is all due to the predictable rise and fall of the Nile's water levels each year, known as inundation (rise) and relinquishment (fall). During the inundation period, which takes place sometime around July, water would rise and fill canals made by Egyptian laborers. Sometime around the end of October, the river would begin to recede, leaving rich silt deposits.

The water that had been collected in the canals and basins during the inundation period was enough to supply nourishment for the crops for the next year. Crops were harvested in June before the return of the floods. The cycle somewhat reliably repeated every year, although it sometimes produced more water than needed, which had negative effects on the crops.

In the early 1900s, several dams were built in southern Egypt in an effort to control the sometimes overzealous flooding. While the dams were able to control the floods to a manageable level, they also decreased the amount of sediment deposits, drastically reducing the fertility of the area. Fortunately for Egyptian farmers, fertilizers are commonplace and they use them to offset the change in land fertility. The system allowed Egyptian farmers to grow a variety of crops, including staples such as wheat and barley. In addition to irrigating the crops and fertilizing the soil, the Nile's inundation period also supplied much-needed drinking water.

The rise and fall of the Nile's life-giving waters inspired the ancient Egyptians to view it as a cycle of death and rebirth. The Egyptians experienced so much success cultivating the Nile that the area became densely populated. Because of this, Egyptian society evolved rapidly developing its own systems of record keeping, accounting and writing (hieroglyphics).

The Nile was not just an agricultural boon for Egypt -- it also was the country's most important roadway, serving as the main thoroughfare to encourage travel and communication capabilities. This function helped to connect outlying portions of Egypt to the capital, enabling trade and communication.

Although the ancient Egyptian society eventually collapsed, the Nile continued to flow. Eventually, Great Britain took control of the Nile basin late in the 19th century, although it later relinquished control in Africa in the 1950s and 1960s.