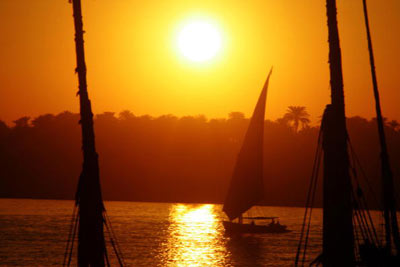 Most people wi­ll probably never venture down the Nile River. Instead, they choose to li­ve vicariously through action movies and television shows. That's definitely the safest route, as the Nile came by its treacherous reputation honestly, thanks to rough rapids, rabid mosquitoes and some very unfriendly, yet beautiful, wildlife. Despite all of these factors, the Nile has given great opportunities to millions of people throughout history, and continues to do so to this day.

The exact length of the Nile is difficult to come by, thanks to differing opinions on the river's source and its complex system of tributaries, creeks and streams. Located in Africa, the most recent and thorough expedition declared the Nile to be 4,175 miles (6,719 kilometers) in length [source: National Geographic]. This expedition, which took place in 2006, used high-tech mapping equipment. The explorers also determined that the true source of the Nile originates somewhere in the depths of the Nyungwe Forest in Rwanda, rather than Lake Victoria as the river's original explorer John Hanning Speke declared in 1858. However, Lake Victoria officially remains the principal source.

It's doubtful that there will ever be a 100 percent consensus about where the river begins and what the exact length is (most sources say that it's just more than 4,000 miles long).

What we do know for sure is that it runs south to north through nine African countries: Uganda, Sudan, Egypt, Zaire, Kenya,­ Tanzania, Rwanda, Ethiopia, and Burundi. Running south to north may seem backward to many people, but the flow of a body of water has nothing to do with geographical orientation. Rather, rivers simply run from high ground to lower ground. High ground in Africa just happens to be in the south, low ground in the north. The Amazon River runs neck-and-neck with the Nile in terms of length, trading the title of world's longest river. A 2007 study put the Amazon in first at 4,225 miles (6,800 kilometers), about 65 miles (105 kilometers) longer than the Nile [source: National Geographic].

How has the geographical layout of the Nile affected the world around it? What creatures and critters call the river home? How did the Nile give rise to one of the world's most revered ancient civilizations, and how does it continue to impact the world today? Read on to find out.