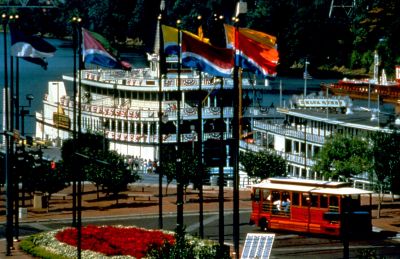 ©2006 Gary Layda The General Jackson Showboat travels to Riverfront Park during its tour.

Nashville loves to show people around, which is why the number of guided tours has increased in the past few years. Everybody has an angle, a different take on where to go to "see Tennessee." You'll observe more of the city, though, if you take one of the mini-buses.

Clip-clop through Nashville in a horse-drawn Southern Comfort Carriage, where up to four people can ride at once. The carriage also will take you back and forth to your hotel.

"The King of the Cumberland" is none other than the General Jackson Showboat (2812 Opryland Dr), which plies the waters to Riverfront Park before returning to its docks at Opry Mills. Come for the Broadway-style entertainment, which is at its finest at night with the three-course meals. It's more informal at lunch, where the spotlight is on one or two country acts.

On an introductory tour, you can become oriented to Nashville while leaving the driving to someone else. Grand Ole Opry Tours (2812 Opryland Dr) knows its subject very well, since it has been around since 1952.

Gray Line Tours (2416 Music Valley Dr, Suite 102) can also escort you beyond the downtown to places like Lynchburg (and the Jack Daniels Distillery) through middle Tennessee. The red trolleys, including the "Dolly Trolley" that go to Music Row are also operated by Gray Line Tours. Like the famous bar, Tootsie's Orchid Lounge, from whence it's named, Tootsie's Tours (422 Broadway, 615-207-3999) will acquaint you with colorful Nashville characters.

As the Jugg Sisters say, "hang onto your wigs and spandex" while you're riding their Big Pink Bus during the NashTrash Tours (Nashville Farmers Market). Yes, they can get a little risque -- and they advise leaving the 13 and younger kids elsewhere because they know all the Music Row gossip. Besides, you've got to learn how to make their Mama-Knock-Ya-Nekkid Margaritas.

Stepping out in Nashville can be done day or night. On the Downtown Historical Walking Tour, you'll get to know the pioneers, politicians, and performers through See Music City Tours (Fifth & Broadway, departing from the glass tower of the Gaylord Entertainment Center).

In the evening, there are "intoxicating" tales from the Haunted Tavern Tours (the origin changes nightly). The minimum age is 21 for the pub crawl, and you'll have to buy your own round of drinks. More spirits are lurking during Nashville Ghost Tours (corner of 6th Ave N and Union St across from the Mobil Five-Star The Hermitage Hotel), especially through spooky Printer's Alley. In Franklin, shadowy figures abound from the Civil War on the Ghosts and Gore Tour, which meets at the atrium between Sandy's Downtown Grille and Meridee's Breadbasket.

If you want to know what goes into making whiskey, then take a Jack Daniels Distillery Tour (Interstate 55, about 26 miles southwest of Lynchburg). Founded in 1866, this is the oldest registered distillery in the United States. Like a neighborhood bar, the last call for reservations is about 30 minutes before closing.

Before you pack your bags and guitar case, take a look at the next section for suggestions on where to stay in Nashville.