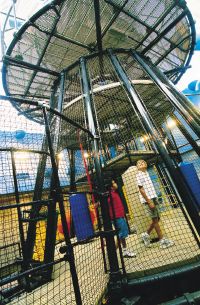 ©2006 Peyton Hoge The entire family will enjoy the hands-on exhibits at the Adventure Science Center.

Nashville is a happening place with all of its year-round activities and major attractions to visit. The Country Music Hall of Fame and Museum, the Belle Ryman Auditorium, the Adventure Science Center, and the Parthenon are just some of the key places that will keep you busy for hours.

There's so much to see that you could split your time between downtown Nashville and the Opryland area, northeast of the city center. The Nashville Convention and Visitors Bureau (501 Broadway) is a good place to start because it offers a variety of passes allowing discounted entry to Nashville's major attractions.

For visitors, the best time to come to Nashville depends on what really interests you: pro and college sports games (usually August to March); car races (April until September); major antiques and garden shows (February to March); music festivals (April, June, and September); opera, theater, ballet, and symphony orchestras (September until May), and juried arts and crafts festivals (May and June).

The Best of Special Events & Attractions in Nashville

The Country Music Hall of Fame and Museum (222 Fifth Ave South) is a $37 million facility featuring more than 40,000 square feet of exhibition space detailing the chronological journey of the history of country music. The tour takes three hours and features 1 million items from country music's back porch beginnings through the heyday of the Grand Ole Opry to today.

Ryman Auditorium (116 Fifth Ave North) is the original home of the Grand Ole Opry and still puts on all kinds of musical shows each evening. During the daytime, visitors can tour the auditorium and stand on the stage to hear stories of when Hank Williams, Patsy Cline, and other country legends performed there early in their careers. Memorabilia like stage outfits and guitars also are on display.

The Adventure Science Center (800 Fort Negley Blvd) features numerous hands-on exhibits and daily displays based on science topics, including earth science, creativity and imagination, sound and light, air and space, and health and energy. One popular attraction is a simulated flight over Nashville. The center's planetarium also features films, such as explaining the "Skies Over Nashville."

The Parthenon (2600 West End Ave) is a replica of Greece's most famous building and now houses Nashville's art museum. The replica was made of plaster for the Tennessee Centennial in 1897 and was later reconstructed in concrete aggregate. As in the original, there is not a straight horizontal or vertical line, and no two columns are placed the same distance apart. And a 41-foot recreated statue of the goddess, Athena, is also a popular item to visit. This statue took eight years to build onsite.

The Belle Meade Plantation (5025 Harding Rd) features a Greek-Revival mansion surrounded by 30 acres of manicured lawns and shade trees. The restored building has been furnished with 19th-century antiques. Costumed guides can give visitors a three-hour tour of the grounds to show them what life was like in the mid-1800s.

The Nashville Toy Museum (161 8th Ave North, 615-742-5678) features unique displays of antique toys, including German and English bears from the early 1900s and 1,000 lead soldiers in battle dioramas. The train room has more than 250 toy and model locomotives and two train layouts depicting Tennessee in the 1930s and Britain at the turn of the century.

The Music Valley Wax Museum of the Stars (2515 McGavock Pkwy, 615-883-3612) has more than 50 lifelike wax figures of famous stars dressed in authentic costumes. In front of the building is the Sidewalk of the Stars, in which the hand and foot imprints and signatures of more than 250 stars are embedded in the concrete.

Bring your barbecue grill for tailgating around the 68,000-seat Coliseum (1 Titans Way), an outdoor stadium set on the Cumberland River with a great view of downtown Nashville. This stadium is home to the Tennessee Titans of the National Football League.

The roar of the engines is never louder than on the 1.33-mile tri-oval concrete track at the Nashville Superspeedway (4847-F McCrary Rd, Lebanon). Besides the two NASCAR Busch Series contests, the Superspeedway also hosts the Indy Racing League and NASCAR Craftsman Trucks before a 150,000-seat grandstand. This is only one of three concrete tracks on the NASCAR circuit.

From alternative fuel vehicles to microcars, Lane Motor Museum (702 Murfreesboro Pike) has some of the most unusual inventions on wheels. Some of the 150 on display are prototypes, making this a one-of-a-kind experience.

Bicentennial Capitol Mall State Park (598 James Robertson Pkwy) covers 19 acres and contains 31 fountains, corresponding to the main rivers of Tennessee, and a vast granite map of the state. The park also has walks, a Wall of History, an amphitheater, and good views, especially leading up to the Capitol itself.

The annual Tennessee Walking-Horse National Celebration is held each August, and many Tennessee walkers can be seen going through their paces at various other annual shows in the Nashville area throughout the year.

While most people know about Nashville's country music scene, many don't realize that the city is a major center for other arts and cultural outlets. On the next page, we detail Nashville's many cultural offerings.