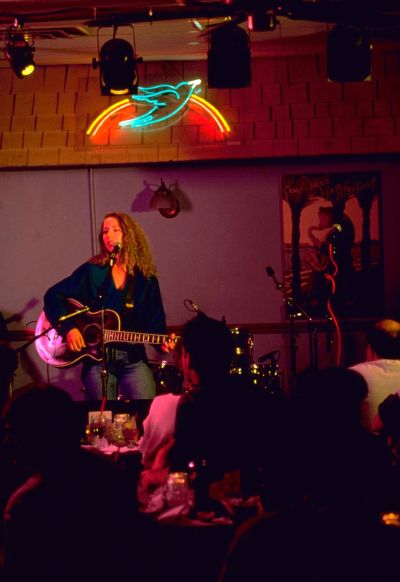 ©2006 Robin Hood Come for the food, stay for the entertainment at the Bluebird Cafe.

Most people think of barbecue and Southern comfort foods when they think of Nashville. You can easily find these types of foods to satisfy your appetite. But tastes are changing everywhere, so the menus are getting lighter around Nashville, although you'll still notice a lot of deep-frying and gravy at the meat-and-three meals, with three referring to vegetable sides.

Nashville has a feast of new restaurants after a famine in the last decade. Several creative chefs have opened their own bistros in the trendy Five Points area of East Nashville beside The Gulch near the railroad tracks off Broadway and near the mecca of Green Hills.

Mary's Pit Bar-B-Que (1106 Jefferson St, 615-256-7696) is an off-the-beaten-path cafe that's known for its pork on cornbread, barbecued chicken on white with pickles, or bone-in chicken sandwich. Those who like a little kick in their sauce can try Mary's hot barbecue sauce with their order.

Neely's Bar-B-Que (2292 Metrocenter Blvd) is the place to find Flintstone-sized beef ribs in a thick, sweet, and spicy tomato-based sauce. You can order the barbecue spaghetti, which is loaded with pork.

Copeland's of New Orleans (1649 Westgate Circle) serves Creole and Cajun dishes like eggplant pirogue and blackened chicken in a dining room decorated to look like a plantation.

Chappy's on Church (1721 Church St) is known for its bayou specialties like grilled spicy shrimp and soft shell crab. The atmosphere is cozy with its indoor Parisian-style street lamps, stained glass, and hand-carved bar from Europe.

The French Quarter Cafe (823 Woodland St) complements its Cajun cuisine with blues and rock music on two stages. You can enjoy the fried red fish on French bread as you sit amid Mardi Gras-like decorations.

Mobil One-Star Monell's Dining (1235 Sixth Ave N, 615-248-4747) specializes in Southern comfort food, especially what the locals call "meat and three (vegetable sides)." Diners pass around bottomless bowls and platters of Southern entrees like pork chops, chicken and dumplings, and country-fried steak. The restaurant is set up with long wooden tables that can accommodate

up to a dozen people, for down-home family-style dining.

Ellendale's Restaurant (2739 Old Elm Hill Pike, 615-884-0171) serves rib-sticking lamb stew, asiago creamed spinach, and coconut chicken sandwiches that gives it a reputation as a must-eat place. At first the oversized bungalow might deceive you, but head inside to find tasty treasures on the menu.

The Towne House Tea Room (500 N 17th St, 615-254-1277) has a reputation for being a good spot for lunch because it serves a different homemade soup each day, or you can opt for the buffet lunch.

The Bluebird Cafe (4104 Hillsboro Rd) draws a crowd because of its nightly musical entertainment, but its Cajun catfish and pork barbecue sandwiches are just as popular.

Jackson's Bar and Bistro (1800 21st Ave S, 615-385-9968) is an ultra-hip coffee shop, bar, and bistro. In the afternoon, you can have specialty teas served alongside cookie-dough eggrolls, or order a glass of wine from the extensive wine list to go with your lunch. At night, the bistro's outdoor patio comes alive for cocktail and appetizers. This is also a good spot for people-watching.

No matter where you choose to dine, your server may be an aspiring musician in Nashville (as was Kathy Mattea among others). Tipping is usually 15 percent.

Are you having difficulty coming up with a plan to see and do as much as possible during your visit to Nashville? The suggested itineraries on the next page will help.