History: How Mount Rainier Was Formed 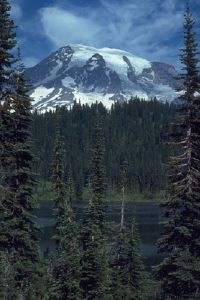 Mount Rainier was forged by fire and shaped by ice. Most geologists believe its birth occurred less than a million years ago on a mass of solidified lava left by earlier volcanoes.

New upswellings of lava, ash, and pumice (lava formed with trapped bubbles of gas) poured from the young volcano's vent thousands of times. Gradually, layer upon layer of debris piled up, forming a summit cone about 16,000 feet high.

Scientists used to think that about 1,500 feet was missing from the top of the peak because it had been destroyed in a great eruption. But today they believe the missing summit was lost in a huge mud flow that took place about 5,600 years ago.

Even without its original top, Mount Rainier is one of America's great peaks and the dominant volcano of the Cascade Range. When naturalist John Muir wrote about the mountain, he stated what many people who have seen it feel: "Of all the fire mountains which, like beacons, once blazed along the Pacific Coast, Mount Rainier is the noblest."

Rainier simply overwhelms the surrounding 6,000-foot mountains, which look like courtiers paying homage to a monarch. The mountain often seems to float alone among the clouds, and when you see it from a great distance, its enormous height, compared with the neighboring peaks, makes it appear closer than it is. In the evenings, as the sun begins dropping below the Pacific horizon, the last light bathes the great mountain's summit, washing it in a warm, pink glow that lasts long after darkness has come to the lowlands.