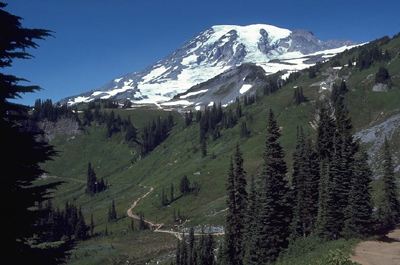 Sightseeing at Mount Rainier National Park obviously starts with the great mountain. Weather permitting, you can see the snow-capped summit of Mount Rainier from more than 100 miles away. It is one of the world's largest volcanoes, and at nearly three miles in height, it also has the distinction of being the tallest peak in the Cascades.

Mount Rainier National Park has many attractions in addition to the mountain itself. Spectacular fields of wildflowers burst into bloom in late spring and summer. As the snow melts, an astonishing array of color marches up the slopes. Here, you will see a profusion of monkeyflowers, buttercups, avalanche lilies, Indian paintbrush, asters, and lupines, rushing to bloom during the brief respite from the cold that often ends during the final week of August.

Where there are not meadows, there are great forests, some with trees that are more than 1,000 years old. The woods provide a home for countless birds and animals, such as tiny chickadees, lumbering black bears, and curious, golden-mantled ground squirrels that look like chipmunks without their stripes.

Higher up on the slopes, mountain goats forage for food on ridges blown free of snow. Here too, finches nest in the rocks in summer and feed on heather buds and high-altitude insects, while hoary marmots and tiny pikas hoard dried grass for winter food.

Mount Rainier National Park is filled with scenic vistas -- including snowy glaciers, meadows of wildflowers, and, of course, the view from Mount Rainier's summit -- that are perfect for photographs. Here are some suggestions:

Climbing Mount Rainier Almost 10 percent of the surface of Mount Rainier National Park is permanently covered by ice. Even as eruption after volcanic eruption built the mountain, glaciers from the Pleistocene ice ages were carving valleys and canyons on the mountain's slopes.

Today, 26 major glaciers remain. This is the largest collection of permanent ice on a single mountain in the United States south of Alaska. Emmons Glacier is at a lower elevation than any other glacier in the nation.

Austere and serene, the summit of Mount Rainier draws mountain climbers of every age and ability from around the globe. The ascent takes two days, with most of the first day taken up by a long hike through the forests and rocky slopes of the mountain's lower two-thirds.

The second-day trip to the top crosses the weathered surface of a moving glacier, one of six that drops down from the summit. Using ice axes, crampons, and steel spikes fixed to their boots, climbers make their way between deep crevasses that have fragmented the ice into fissures and canyons. In some places they cross crevasses on bridges of unmelted snow.

At the top of the mountain is a small crater left by the most recent eruption a little more than a century ago. Climbers usually walk around it to the Columbia Crest. At 14,410 feet, this is the highest point on the peak; on clear days you have an unsurpassed view of the Pacific Northwest.

Mount Rainier, along with several other peaks in the Cascades, has a fiery history as an active volcano. On the next page, learn how Mount Rainier was formed.