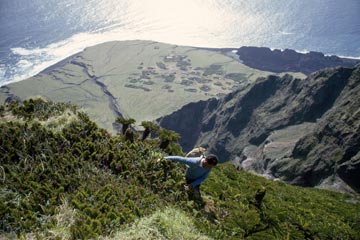 We live in a technologically advanced and interconnected world. Places that were once almost impossible to reach are now accessible by road systems, waterways and airplane rides. Despite the ease with which we can contact people on the other side of the globe -- whether it be through the click of a mouse or a letter in the post -- about 10 percent of the Earth is more than 48 hours away, by way of land travel, from the nearest city [source: O'Neill]. While in recent years it definitely has become easier to reach far away lands, there are many places in the world that remain inaccessible, uninhabited and secluded -- in other words, the most remote spots on Earth.

To determine whether a location qualifies as "remote," you should consider the inaccessibility of the place (how difficult it is to reach the spot) and its isolation (the distance from the nearest inhabited location). In terms of inaccessibility, the point farthest from sea is the Eurasian Pole of Inaccessibility, which is located more than 1,553 miles (2,500 kilometers) from any ocean and is located in northern China. The point farthest from land is Point Nemo, which is in the South Pacific, more than 1,553 miles (2,500 kilometers) from any land mass [source: Murrell]. Neither of these locations are inhabited by humans.

What's the most remote inhabited location on Earth? A place called Tristan da Cunha. The approximately 270 residents of this archipelago see a mail ship only once a year [source: Weaver]. Tristan da Cunha is located at 37 South and 12 West, 1,242 miles (2,000 kilometers) from St. Helena and 1,739.8 miles (2,800 kilometers) from the nearest mainland, the Cape of Good Hope, South Africa. Tristan is circular in shape and is about 6.2 miles (10 kilometers) in diameter with a total area of only about 30 square miles (78 square kilometers). The summer season falls between December and March. During the winter months, the central volcanic peak of Tristan, which rises to a height of 6,594 feet (2,010 meters), is covered in snow. Tristan da Cunha, the main island, is the only inhabited island in the chain. The other islands that make up the archipelago -- Nightingale, Stoltenhof, Gough, Middle and the appropriately named Inaccessible -- are not populated by humans.

But how did people come to inhabit this remote island chain? And how did they find out about it in the first place? Find out on the next page. 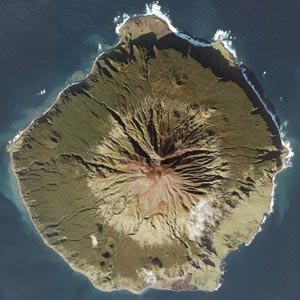 For more information on travel and interesting spots around our planet, visit the links on the next page.