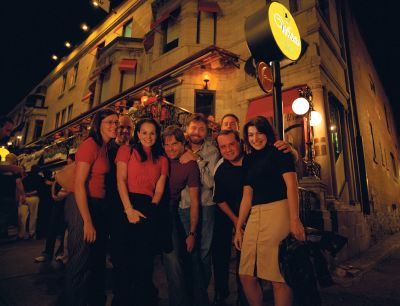 ©2006 Tourisme Montreal/Stephan Poulin Crescent Street is always buzzing, thanks to patronage by English-speaking locals and tourists.

Nightlife in Montreal is the same as many other cities. You can have your pick of bars, lounges, pubs, after-hour nightclubs, and cabarets, depending on how late you want to stay out.

Insider's Guide: The Best of Nightlife & Entertainment in Montreal

Cathedral (3781 Saint Laurent, 514-842-4721) is another nightclub that's trendy but has good music if you can stand a gothic decor. The best nights to visit are Thursdays through Saturdays. Club Atlantis (1106 de Maisonneuve W, 514-288-8829) is a nightclub featuring urban, hip-hop, and Top 40 music on a great sound system that pumps out onto large dance floors. Smoke machines and the deep-sea decor help create a unique atmosphere.

For late-late-late night fun, try the Aria Nightclub (1280 Saint Denis, 514-987-6712), which is open past 3 am. The building has three floors, each offering different music, and a huge sound system that will make you dance instead of just standing around talking or sitting on the couch.

The Hour and Montreal Mirror are two local alternative weekly newspapers chock full of weekly concert listings. They're published every Wednesday and are available free throughout the city. The Montreal Gazette, the city's daily newspaper, is another great reference of things to do.

Montreal is synonymous with the circus, and hometown favorite Cirque du Soleil immediately comes to mind. Cirque du Soleil debuts a new show under the blue-and-yellow big top in the Old Port of Montreal (De la Commune St, between the Saint Lawrence River and Old Montreal) every other spring.

In keeping with the tradition, TOHU, Montreal's Circus Arts Complex (2345 Jarry E), was specifically built with circus performance in mind. The site features a small museum devoted to the history of the circus, exhibition space, family activities, as well as unique circus acts from around the world. It's a bit out of the way, so a cab ride is suggested, but well worth it.

Major League baseball's Montreal Expos may now be a memory, but sports fans still have some options like a night of hockey with the Habs, the Montreal Canadiens, at the Bell Centre (1216 de La Gauchetiere SW).

If you're tired following a night out on the town, you'll find plenty of opportunities to relax and unwind in Montreal. See the next section for suggestions.