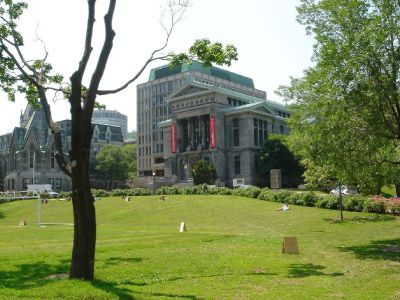 ©2006 Michael Wu Make sure to take in the neoclassical beauty of the Redpath Museum.

Saint Joseph's Oratory of Mont Royal, Olympic Stadium, and the cross atop Mont Royal Park are all visual cues that you've arrived in Montreal. Remnants from Expo 67, most notably the American Pavilion, now the Montreal Biosphere, and the French Pavilion, now home to the Montreal Casino, offer additional indications of Montreal's unique skyline.

Some of the landmarks take on a life of their own like the spiritual sense one gets when visiting Saint Joseph's Oratory of Mont Royal or the many churches found in every neighborhood in Montreal. Old Montreal's distinctive buildings feature windows that let in as much as they could during the days before electricity. And sometimes landmarks teem with life, like a visit to any number of Montreal's distinctive neighborhoods.

Insider's Guide: The Best of Architecture & Landmarks in Montreal

Insider's Guide: The Best of Architecture & Landmarks in Montreal

The magnificent Saint Joseph's Oratory of Mont Royal (3800 Chemin Queen Mary Rd) is an impressive structure founded just more than one century ago and still attracts pilgrims from all over the world. The basilica dome reaches almost 300 feet into the sky. Don't miss lighting a candle in the votive chapel where the walls are adorned with crutches and canes, a testament to Brother Andre's healing powers. You can actually feel the temperature rise as you walk into this sacred space.

Maison Saint-Gabriel (2146 Dublin Place, in the Pointe Saint Charles neighborhood of Montreal) is a magnificent 300-year-old house that's one of the finest examples of traditional Quebec architecture. Converted into a museum in 1966, it showcases different aspects of rural life in the 17th century and the extraordinary adventure of the King's Wards, young orphan girls who looked toward a new life in New France. The house features period furnishings and tools and items of French-Canadian heritage like woodcuts from ancient churches and chapels.

The Canadian Center for Architecture (1920 Baile St) is a popular Canadian original that's all about art in architecture. Don't expect a traditional art exhibit experience. But if you've a passion for a building plan or find the beauty in a blueprint, this is your place. The site often features fun weekend family workshops and thematic movie screenings. Phyllis Lambert founded the CCA in 1979 and her work as an architect includes the Seagram Building in New York, the Toronto Dominion Centre, and the Mobil Three-Star Millennium Biltmore Hotel in Los Angeles. Admission to the center is free on Thursday evenings.

Chateau Ramezay (280 Notre Dame St E) was constructed in the 18th century and once housed the governors of Montreal, the West Indies Company of France, and the Governors-General of British North America. It opened as a museum in 1895 and today is the oldest private museum in Quebec. The building has collections of furniture, paintings, costumes, porcelain, and art objects from the 17th to 19th centuries.

Notre-Dame Basilica (110 rue Notre-Dame W) is Neo-Gothic in design with dramatic architecture. The ceiling is a deep purple with golden stars and has hundreds of wooden carvings. The stained-glass windows depict scenes of the religious history of Montreal and not biblical scenes like other churches. Its bell weighs 24,780 pounds and is located in the Perseverance Tower, and there's a 10-bell chime in the Temperance Tower.

Mary, Queen of the World Cathedral (1065 Cathedral St) is the third largest church in Quebec, even though it's a 1/3 replica of St. Peter's in Rome. The church's front is topped with statues of patron saints of the 13 parishes of Montreal.

Place d'Armes (Saint Sulpice and rue Saint Jacques) is the center of Old Montreal and a square of great historical importance for the city. The founders of Ville-Marie encountered the Iroquois here in 1644 and rebuffed them. In the square's center is a statue of de Maisonneuve, the first governor of Montreal, and at one end is the Saint Sulpice Cemetery with an old wooden clock, the oldest building in Montreal.

Olympic Stadium (4141 Pierre de Coubertin Ave) was the site of the 1976 Summer Olympic Games. It has an inclined tower that's 626 feet leaning at a 45-degree angle that was once used to open and close the retractable roof. Due to problems with the roof, it was replaced in 1988 with one that doesn't open, and the tower now has an observation deck.

Architect and urban planner Moshe Safdie is known for Habitat 67 (2600 Pierre Dupuy Ave), a housing complex he built in 1967 as part of his Master's thesis at McGill University. The complex combines private homes with modern apartment buildings to create interlocking modules with gardens. The complex became private condos in the 1980s, but you can still drive by and admire the exterior beauty of the design.

The Montreal Casino (1 Ave du Caino) is a unique building consisting of three -- the French Pavilion, the Quebec Pavilion, and an annex. The main building has five floors with low ceilings and no windows in many areas.

The World Trade Centre Montreal (380 Saint Antoine St W) is a 10-story complex that includes a 600-footlong glassed-in atrium, a fragment of the Berlin Wall, and a fountain by French architect and sculptor Diedonne-Barthelemy Guibal. The promenade follows the original lines of the city's 18th-century walls.

Redpath Museum (859 Sherbrooke St W) is a good example of neoclassical design. Its interior and exterior have been used as a set for movies and commercials, including the 1986 Barnum film starring Burt Lancaster and the 1999 Eye of the Beholder with Ashley Judd.

If you'd rather shop than look at buildings, Montreal is perfect for that, too. As you'll see on the next page, Montreal offers everything from major retail shops to unique specialty boutiques.