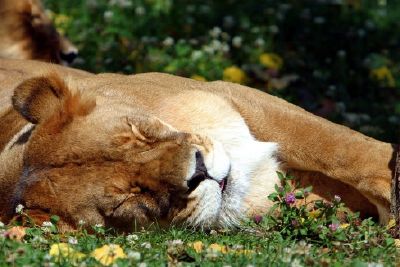 ©2006 Carl Robidoux Parc Safari is fun for the whole family, with animals like this lion, a swimming beach, and more.

Montrealers work hard; they just play harder. Chances are that where there's a tourist, there's a local equally enjoying all the city has to offer. On the agenda: a bike ride through the Old Port, a hike up the mountain, a relaxing stroll through flora at the Montreal Botanical Garden, and a glimpse of fauna at the Montreal Biodome.

And there's always a celebration of sorts going on -- just pick a festival, any festival. Get ready for lots of walking and a guarantee of a good night's sleep.

Insider's Guide: The Best of Special Events & Attractions in Montreal

The Montreal Botanical Garden (4101 rue Sherbrooke E) is one of the city's gems and celebrated a milestone 75th anniversary in 2006. The site features some 30 theme gardens, including the First Nations Garden that highlights indigenous Canadian culture and plants; a fun City Garden, offering great gardening ideas for small spaces; and Courtyard of the Senses, a garden geared for those who are visually impaired. This courtyard features an optional blindfolded tour that lets you experience the touch, smell, and sometimes taste of this thoughtfully planned space. It's an eye-opening experience.

The botanical garden also features many year-round special events. In spring the Butterflies Go Free; Fall brings the Magic of Lanterns, which features some 800 colorful silk lanterns displayed in the Chinese Garden -- a truly illuminating experience.

Insectarium de Montreal (4581 Sherbrooke St E) features a collection of more than 350,000 insects in a building designed to resemble a stylized insect. Interactive and participatory exhibits take visitors through aviaries and living displays in six geographically themed areas. Every other year a guest chef cooks up some interesting critter concoctions in a popular event called Insect Tastings. Don't miss it if you're in town.

Make time for the Montreal Science Center (King Edward Pier, 333 de la Commune St W), where you'll find interactive science fun. It's a must for families, but mom and dad will find themselves having an equally good time. There's exhibition space and an interactive theater game featuring the high-flying Canadian Snowbirds, where visitors compete against one another.

Follow the church bells to Notre Dame Basilica (100 Notre-Dame St W). The interior of this Gothic Revival church will simply take your breath away. While the basilica offers a unique way to visit with a multimedia presentation called "And Then There was Light," your own self-guided visit will do. Incidentally, the basilica is where Quebec pop diva Celine Dion was married.

One of the best museums in town is Pointe-a-Calliere Museum of Archaeology and History (350 Place Royal). In the past, the museum's temporary space has hosted everything from Japan treasures to Jules Verne artifacts to the Dead Sea Scrolls. Permanent exhibits include a multimedia presentation called "Montreal, Tales of the City."

Visit the Chateau Ramezay Museum (280 Notre Dame St E). The building dates to 1705 and was home to Claude de Ramezay, a governor of Montreal. Benjamin Franklin is known to have visited the chateau on a diplomatic mission in 1776, during a brief time when Montreal was actually part of the United States during the American Revolution.

Make sure to stop by the Olympic Stadium (4141 Pierre de Courbertin Ave), the former home to the Montreal Expos and the main venue for the 1976 Olympics. It ranks as the tallest inclined tower in the world and looks as if it has just landed there from outer space.

Chateau Dufrense (2929 Jeanne-d'Arc Ave) features treasures of a 1920s bourgeois residence once shared by two brothers. The building has ornate ceiling frescos and was designed by Guido Nincheri, an immigrant artist who designed and decorated a number of Montreal churches.

Mont Royal Park (Cote des Neiges and Remembrance rds) is the city's namesake. Architect Frederick Law Olmstead, also known for designing Boston Common and New York's Central Park, designed Mont Royal Park. It's a green space where Montrealers come to play, relax, and simply get away from it all.

In summer, get there by biking or hiking -- the main paths are very well marked. In winter, the mountain offers fun in the form of snowtubing, sledding, cross-country skiing, and snowshoeing. The ice-skating rink and pavilion were restored in 2005.

Venture to the Montreal Planetarium (1000 Saint Jacques St) for a look at the heavens above -- Montreal-style. Celebrating a milestone 40th anniversary in 2006, the planetarium offers many locally produced multimedia presentations and attracts a rather nice local crowd of stargazing enthusiasts.

With more than 30 cultural institutions in Montreal, you won't be at a loss to find arts and culture. See the next section for information on some of the best museums and such.