Getting In, Getting Around Montreal 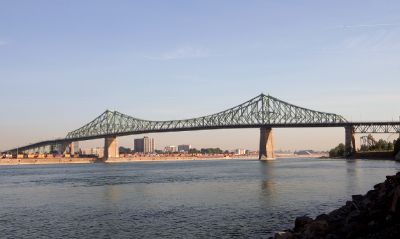 If you're coming from the South Shore, travel across the Jacque Cartier Bridge.

Your best bet for getting around Montreal is on foot, but there are other options if this isn't the best mode of transport for you. Use this Montreal transporation primer to help you out.

Visitors need to pass through Canadian Customs and Immigrations upon their arrival. For information and visitor requirements, visit Canada Border Services Agency at www.cbsa-asfc.gc.ca. In addition, allow yourself plenty of time when leaving Montreal via airplane as U.S. Customs and Immigrations are handled upon your departure in Montreal. Visit the Department of Homeland Security for information and links.

Rental car: To be honest, you don't need a car in Montreal. Despite knowing that fact, if you still prefer to rent a car, car rental agency counters are conveniently located inside the airport's parking garage. Those companies include National, Alamo, Avis, Budget, Hertz, Enterprise, Dollar, and Thrifty.

Public transportation: Unfortunately, the Montreal subway system, or Metro, doesn't service Trudeau Airport. A commuter train line (Montreal-Dorion Line) is nearby but not worth the hassle.

Instead, the Montreal-Trudeau L'Aerobus Shuttle Service (514-842-2281) offers inexpensive and reliable transport from the airport to Montreal's Central Bus Station near Berri Street and Boulevard de Maisonneuve in the Latin Quarter. This main shuttle stops at a few hotels along the way, and a secondary shuttle services most of the major downtown hotels.

You can purchase a shuttle ticket in the airport at the counter inside the terminal in the domestic flights area on the ground level or at the booth outside the main entrance. A one-way adult ticket costs $13; a round-trip costs $22.75 (Canadian). You can find the shuttle on the airport's ground level. Shuttles leave every 20 minutes, and travel time is usually 45 minutes, depending on traffic.

Taxi: A taxi ride from the airport is a flat rate of $35 to any point downtown. A number of taxis are lined up on the airport's ground level. Payment must be made in Canadian funds, but some drivers will make exceptions and accept U.S. currency.

Rush hour: Like any other major city, Montreal's rush hour ranks with the best or worst of them. Morning rush hour is 6:30 am to 8:30 am, and afternoon rush hour is 3:30 pm to 6 pm, so avoid driving during those hours if you can. If you're driving, most likely you'll be approaching from the New York border on Montreal's South Shore.

The wait time at the main border crossing at Interstate 87 in New York/Autoroute 15 Nord in Quebec -- either entering Canada or returning to the United States -- can take but a few minutes or up to 40 minutes during the busy summer season, especially on weekends. The easiest access into Montreal from the South Shore is by the Jacques Cartier Bridge, followed by the Champlain Bridge. Autoroute Bonaventure, the second exit just after Champlain Bridge, will take you directly into downtown.

Rules of the road: Montreal means metric. And that means the speed limit on the highway is 100 kilometers per hour (60 mph). Highway signs are mostly bilingual. Just in case, "pont" means bridge and "prochaine sortie" means next exit.

Driving through city traffic is an art because there are a maze of one-way streets and lots of pedestrians with which to contend. In addition, a summer festival means the closing of some of the busiest streets in the city. A couple Montreal rules of the road: A flashing green light signals the driver that it's OK to make a left turn. Right-on-red turns are illegal in the city.

Your biggest driving challenge may be when it comes time to park the car, as most of the parking signs are written in French and stated in military time (for example, 16H means 4 pm). There are daily parking restrictions for street cleaning, rush hour, and residential parking (these sectors are numbered within a red box on most signs). If you can't decipher the sign, just ask a local to help with the translation.

Public transportation, fares: The Montreal Metro subway system is the best way to get about town quickly. It's easy to navigate because there are only four color-coded lines: green, blue, orange, and yellow. It's also clean, quiet (rubber tires), accessible, reliable, and inexpensive.

The bus system, Societe de Transport de Montreal, is even more extensive and equally recommended. A one-way fare costs $2.50. A strip of six tickets costs $11.50. A one-day tourist card, good for unlimited use, costs $9; a three-day tourist card costs $17. If you're staying longer, purchase a regular weekly pass for $18.50.

One word of note: The Metro does not operate 24 hours a day. It stops running every night for a few hours from about 1 am to 5:30 am.

Taxis, by foot, by bike: Taxis are reasonable for short hauls, and hailing a cab in Montreal is very safe and easy. It costs a minimum of $3.15 for the cab ride and an additional $1.45 per kilometer. There's a wait time charge of 55 cents per minute as well.

The two best ways to travel in Montreal are by foot or by bike. Bring your most comfortable pair of sneakers because walking is the way to get around in this town. Or bring your bike: Montreal boasts hundreds of miles of bike paths throughout the region.

With so much to see and do in Montreal, you may want some suggestions. Go to the next page for details on the city's many special events and attractions.