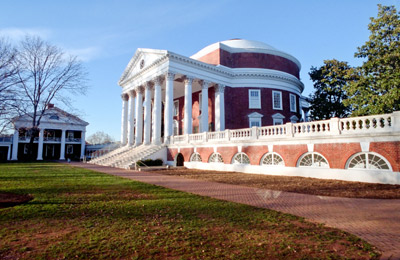 The Division of Perceptual Studies at the University of Virginia studied reincarnation and other seemingly paranormal events.
David Coleman/Dreamstime.com

Jefferson often spoke of his distaste for government and announced his retirement long before he held the office of United States president. He wanted to settle down quietly at his little mountain with his books and papers. But his plans for retirement didn't last long: He found himself drawn back into politics and served two terms as president, from 1801 to 1809. Even after he returned from Washington and gave up "that distressing burden of power," he wouldn't find peace at Monticello [source: Bear].

As we've learned, Monticello was a popular site for scholarly pilgrimages, but it also attracted other visitors. People wanted to see the former president. Some went so far as to peep through the windows at Jefferson and his family at the dinner table. Not all guests were uninvited, though. Jefferson welcomed family, friends and fellow scholars to his home. At times, Monticello had so many houseguests that its stables were jam-packed with horses and its every square foot of floor covered in makeshift mattresses for overnight visitors. Edmund Bacon observed that not all of these guests came for the pleasure of meeting Jefferson -- some of them wanted only a free meal and drinks.

Jefferson's re­putation for generosity paved the way for another kind of visitor to the steps of Monticello: beggars. Even though Jefferson was nearly $107,000 in debt, he never refused the poor [source: Monticello FAQ].

But when Jefferson was entertaining legislators and political scholars, he restricted access to Monticello. Hosting only four or five of these men at a time, Jefferson conducted some pretty serious dinner parties. He even limited servants' access to the dining room, preferring instead to have meals placed in dumbwaiters (carts that held all the utensils, dishes, food and beverage one would need for the meal) or to have it served on the shelves of a revolving door, which the servants would stock in the kitchen and Jefferson would turn to serve the plates directly to the table. If wine ran out at the table, he used another type of dumbwaiter, one with a pulley, to hoist wine from the cellar to the dining room. The reason for such privacy? Jefferson used these intimate dinners as an opportunity to influence politicians. He even kept a record of how his parties swayed the voting records and politics of his guests.

Elements of Monticello were extended to Jefferson's designs for the University of Virginia, a project which occupied him for the last years of his life. Later, under the presidential term of Franklin Delano Roosevelt, construction was begun on a Jefferson memorial in Washington, D.C., that featured the same prominent dome as Monticello.