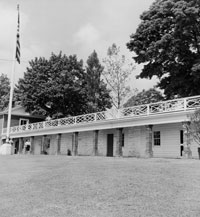 House servants lived in these slave quarters, while other slaves had cabins.
Authenticated News/Getty Images

Jefferson's political views on slavery are some of the most controversial points he made in his career. He believed that slavery was a necessary evil and that the institution should be slowly phased out -- after his lifetime. For a man who supported life, liberty and the pursuit of happiness, Jefferson's acceptance of slavery contradicted almost every political maneuver he made.

Jefferson rationalized his ownership of slaves by trying to be a fair, kind master. According to the slave Isaac, whose memoir was recorded around 1847, Jefferson was a calm-tempered man. The overseer Jefferson appointed to Monticello, a man named Edmund Bacon, reflects similar sentiments about him. In Bacon's biography, he says that Jefferson was "indulgent" toward the slaves and that he preferred to see them dismissed rather than whipped for their transgessions [source: Bear]. About 80 of Jefferson's 200 slaves lived and worked at Monticello, while the rest were divided among his other four plantations.

Most of the slaves at Monticello were inherited from John Wayles, Jefferson's father-in-law. The slaves that worked as house servants were supposedly fathered by Wayles himself. House servants were responsible for cooking and laundering. Their quarters were located in the basement of the south terrace. Slaves that worked in the fields lived in single-room log cabins. Their tasks ranged from planting and harvesting crops to caring for livestock, constructing buildings and fences and working in Jefferson's nail-making industry.

Slaves were given rations of corn and preserved meats, but they grew their own vegetables and raised chickens. They sold their crops to the main house or at the Charlottesville Sunday market. This gave them a small dose of independence: pocket money and a weekly excursion.

Jefferson didn't educate his slaves, but his grandchildren taught some how to read and write. In addition to interacting with the Jefferson family, the slaves were permitted to form families of their own. Laws prohibited slaves from marrying, but Jefferson condoned marriage among his slaves. By law, any children that the slaves had became Jefferson's property. When they turned 10, Jefferson put them to work [source: American Sphinx].­

Toward the end of his life, an indebted Jefferson was forced to sell many of his slaves. He never could find a peaceful, conscionable resolution to the slave question, and today it's one of his sharpest criticisms.

Despite these hypocrisies, Jefferson was well-respected by his contemporaries. In our last section, we'll see how Jefferson entertained these visitors at Monticello.

Sally, the daughter of Betty Hemings and John Wayles, accompanied Jefferson's daughter Maria to France when he requested that she join him abroad. Sally was the personal servant and chaperone to Maria and Jefferson's other daughter, Martha. As several witnesses attested, Sally was extraordinarily attractive and well-mannered. Jefferson paid for her education and compensated her generously for her attentiveness to his daughters.

In 1802, a radical political writer named James Callender published a story that Jefferson had an illicit sexual relationship with Sally and that she had given birth to his son. This was the beginning of several centuries of speculation about Jefferson's affair with his slave. In 1998, DNA tests somewhat conclusively confirmed that Jefferson was the father of at least one of Sally's children. You can read more about the Jefferson-Hemings affair in the PBS Frontline Report "Jefferson's Blood".­