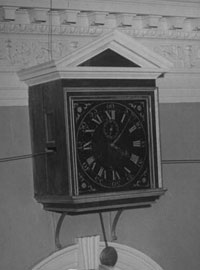 The great clock in the entrance hall may look simplistic, but it was a one-of-a-kind design with some pretty unique features.
Alfred Eisenstaedt/Time & Life Pictures/Getty Images

Jefferson liked to keep busy. In a letter to his daughter Martha, he wrote, "Determine never to be idle…It is wonderful how much may be done, if we are always doing" [source: Letters of Thomas Jefferson]. Naturally, he was fascinated by time. There's a clock in almost every room of Monticello, but the two most notable ones are the great clock in the entrance hall and the astronomical case clock in his study.

He designed the great clock himself and had it made in Philadelphia. It told the time and the day with a long, weighted chain that descended to the floor. Because the clock was originally intended for use in a different house, Jefferson had to make a small hole in the floor to mark Saturday. The interior face of the clock faced the hall, and the exterior face looked outward toward the plantation. The exterior face had a large hour hand for the workers to read and a gong that struck loudly enough to be heard three miles away.

The astronomical case clock was also made in Philadelphia. Jefferson purchased this clock for its mechanical prowess: this clock reputedly kept perfect time. This clock also tells the day of the week, but it uses a chain and weight that moves inside of its case.

Jefferson's clothing rack never failed to amuse his guests when they received the grand tour. This device was a tall spiral rack with fifty arms that held his clothes. He called it a turning machine because it could be rotated with a stick. This allowed Jefferson to choose his outfit without climbing the ladder to his ceiling-high closet.

The portico seen here could have been used as a sun room when louvered blinds were lowered from the columns.
Alex Wong/Getty Images

Because Jefferson liked to write letters and keep records, he relied on a polygraph machine. The polygraph machine used a duplicate set of mechanical pens to simultaneously copy Jefferson's words as he wrote them. John Isaac Hawkins invented the device in 1804, and Jefferson got his hands on one the same year. Jefferson's friend Charles Willson Peale continually tweaked Hawkins' design, and Jefferson exchanged his model as soon Peale's upgrades were available.­

Fighting the heat of hot Virginia summers was a nearly impossible task, but Jefferson did his best to cool Monticello. Windows and doors were frequently left open to allow air to circulate, and the east and west porticoes could be turned into sun rooms by louvered blinds that lowered from the columns. If all else failed, Venetian porches were the perfect place to escape the heat. These porches were framed with wooden blinds that filtered sunlight but allowed cool breezes through.

Clever as these devices are, Jefferson is credited with making only three inventions. In the next section, we'll take a look at Monticello's grounds and learn what those inventions are.