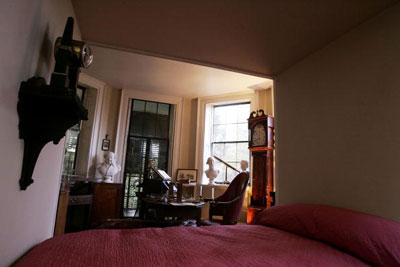 Strangely enough, the formal likeness of Monticello that's drawn on the United States nickel -- the west front's dome room and portico -- is actually the side of the house that Jefferson and his family used. The so-called formal entrance was at the east front.

When guests crossed the threshold from the east front into Jefferson's imaginarium, they found themselves in the museum-like entrance hall, also known as the Indian Hall. With walls rising eighteen feet, eyes were drawn high upward to ornate woodwork and carvings, paintings and artifacts. There were replicas of famous paintings, nearly 40 Indian artifacts, engravings of the Declaration of Independence, maps, busts of philosophers and politicians, and specimens from the Lewis and Clark Expedition. There were also 28 chairs in the hall to accommodate Jefferson's many visitors.

Perhaps the most famous room in Monticello is the dome room. Its octagonal walls are painted yellow and its wooden floor is green. Each wall has a circular window, and the oculus, or top, of the dome has a window made of thick, blown glass. The peculiar room was largely unused. Jefferson's grandson used it temporarily for a bedroom, but the difficulty of climbing steep stairs and meandering down a low-ceilinged hallway kept most visitors away from the dome room. Even today, it's underutilized -- fire regulations keep tourists out of the room.

On the other hand, Jefferson's study, sometimes called his cabinet, was the site of much activity. Jefferson spent a lot of time in here, reading, writing letters and receiving guests. In addition to a perfect time-keeping instrument (which you'll read more about later), this room had a swivel desk chair so that he could turn from one task to another more easily. This swivel theme also applied to his rotating desktop and bookstand. The bookstand could hold up to five books at a time -- no paper, pen or book was ever out of reach for Jefferson.

The deep-reaching influence of Parisian design extended to his bedroom. This room relied on a skylight for illumination. Not that the sun ever found him in bed: Jefferson preferred to rise early, start his own fire and get to work right away. His bedroom wasn't just for sleeping. He also visited with family members here and did a lot of his reading in the quiet space. To reserve floor space for these activities, he incorporated an alcove bed into his bedroom's design. The bed was built into the bottom half of one wall, and a lofted closet occupied the upper half of the wall. Two circular holes in the wall allowed ventilation and light to penetrate the space. These space-saving measures came with one drawback, though: Jefferson had to use a ladder to reach his closet.

In the next section, we'll take a look at some of Monticello's most advanced gadgets.

Two of the busts displayed in the entrance hall were of Alexander Hamilton and Jefferson. The two men were great rivals, and Jefferson arranged their busts head-to-head. If they were meant to be squaring off, the advantage was Jefferson's -- his bust was much bigger than the one of Hamilton.