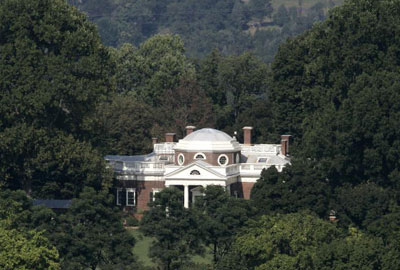 When he turned 21 in 1764, Thomas Jefferson inherited 5,000 acres of land in Albemarle County from his father, Peter [source: Monticello Plantation]. This large tract of land was organized into separate farms: Shadwell (where Jefferson was born), Tufton, Lego, Poplar Forest and the parcel that would become the site of Monticello.

In 1760, Jefferson began drawing plans for his plantation home. He turned to the architect Palladio for inspiration. Jefferson got his sense of proportion and form from Palladio's designs. He also took a cue from some distinctive Palladian features, like columns, arches, domes and pediments (triangular frames). While Palladian architecture had become popular in European houses and buildings (largely because it was striking but simple enough to be imitated), it was new to America [source: University of Pennsylvania]. Jefferson capitalized on all the elements the style had to offer.

Villa Rotunda in Vicenza, Italy is one of Palladio's country houses, designed and built for Paolo Almerica in 1556.
Andreas Solaro/AFP/Getty Images

His initial plans for Monticello included a two-story main house flanked by two pavilions. The main house had two porticoes, or porches. He planned for the main house to be divided into eight rooms and the cellar below to have six. His rough sketches included plenty of ornamental features, too. Stately pediments and columns would be the focal point of his perfectly symmetrical home.

Jefferson broke ground at Monticello in 1768. The first step was to prepare the area for construction. But Jefferson was careful to spare plenty of trees -- he left much of the woods untouched to create a private, green shroud for his home. After the mountain was leveled in 1769, construction officially began.

Paid laborers and slaves worked on the construction site. Slaves were respo­nsible for the framework of the house, and masons laid the bricks. Because Virginia's red clay was so abundant, Jefferson's labor force was able to make most of its bricks by hand on the plantation site. Other materials were collected from the grounds, too, including stones, which were used for the cellar, and limestone, which was used for mortar. Jefferson imported the glass and mahogany, as well the tradesmen that installed it. For the detailed moldings and cornices, he brought in a specialist from Philadelphia [source: Monticello FAQ].

­Construction was well under way when Jefferson was appointed U.S. Minister to France in 1784. He directed the project from his post abroad. But Jefferson returned home from Paris with many new ideas. He amended his original plans for the house to include skylights, indoor privies, round windows and the famous dome room (or sky room, as Jefferson referred to it). These renovations began in 1796.

At last, in 1809, Monticello was completed. It had three stories and a grand total of 43 rooms -- that's nearly one room for every year it took to build the house [source: Monticello FAQ]. In the next section, we'll examine some of the most notable rooms in the house, including Jefferson's unusual bedroom.