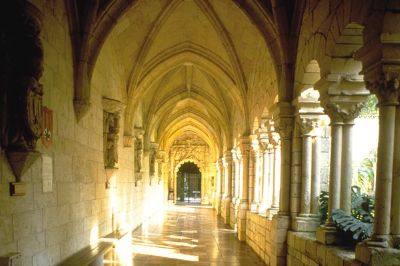 ©2006 Greater Miami CVB The Ancient Spanish Monastery is a tranquil oasis for those looking to get away from the high energy of Miami.

Though Miami is abuzz 24/7, enclaves and retreats are available for you to sequester yourself away from the hubbub. This is especially easy since Miami's main draw, the beach, offers tranquility and solitude as only the ocean and seaside can.

If you don't mind company but still want to play it low-key, grab a table outside a bistro in one of the more happening neighborhoods, such as Lincoln Road in the South Beach area, and sit back and take in the sights and sounds of the street. When you fade into the background, reality is transformed into theatrical productions rivaling those on Broadway.

Insider's Guide: The Best of Relaxing & Unwinding in Miami

Miamians who want to get out but aren't in the mood to exert a lot of energy often opt for one of the live concerts about town. Some of the best are offered by the Chopin Foundation of the United States. Headquartered in Miami, the Foundation offers a number of free concerts from world-class performers throughout the year at the Granada Presbyterian Church in Coral Gables.

The easiest way to unwind is to take in the stars after the sun sets on Miami Beach. But there is another place with just as much atmosphere. Every Friday night from 8 pm to 10 pm, the Miami Museum of Science and Planetarium (3280 S Miami Ave) offers viewing through the Weintraub Observatory for close-ups of the planets, four moons of Jupiter, rings of Saturn and deep sky objects like galaxies and nebulas. There also are laser shows, astronomy shows, and special exhibits and events scheduled throughout the day.

Who would look for an ancient Spanish monastery (16711 W Dixie Hwy) in Miami? It's here, all right. Built in Segovia between 1133 and 1141 and brought over and reconstructed stateside stone-by-stone by William Randolph Hearst, the St. Bernard de Clairvaux Church is an unexpected Miami architectural gem. Today, the monastery's austere beauty and tranquil grounds is a popular spot for quiet reflection.

The Parrot Jungle and Gardens (1111 Parrot Jungle Trail) is an 18.6-acre site perfect for strolling as you eye birds, reptiles and orangutans.

Bayfront Park (301 N Biscayne Blvd) is a 32-acre green-space oasis in downtown Miami that's great for strolls, dog walking or lingering near its fountains. Its amphitheater frequently hosts music festivals, so find a place on the lawn or bring a chair when you can.

Tropical Park (7900 SW 40th St, 305-223-8710) is the perfect setting for a leisurely bike ride or running along its many trails. Four lakes located in the park offer opportunities for numerous water sports, including swimming or fishing.

If you want to take in all the sights and sounds of Miami but don't know where to start, try an organized tour. We have several tour suggestions on the next page.