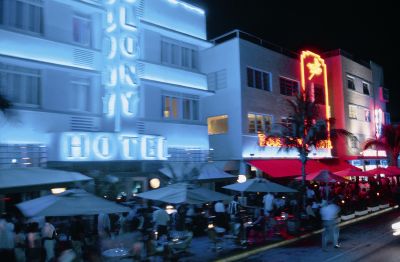 ©2006 Greater Miami CVB On any given night, the streets of Miami are brimming with pleasure-seekers.

Boredom is not an option in Miami. "Florida-fied" attractions offer entertainment unique to the Sunshine State. Where else could you visit a castle carved from coral, swim with dolphins, walk through an authentic Indian village and hang out with 400 monkeys?

Since tourists began a southward migration almost 100 years ago, Florida has built its reputation and tourism industry on wacky roadside attractions, and thankfully, a handful of places still exist where you can get a feel for the old Florida.

This isn't to say, however, that there aren't plenty of new venues to pique your interest. New construction is a way of life; not a day goes by without a new boutique, museum, restaurant or entertainment venue opening.

Hotel happenings include Acqualina on Sunny Isles Beach and the Regent Bal Harbour, both scheduled to open in late 2006. Recently opened 8-1/2 Restaurant in Miami Beach's Hotel Clinton and Spy Lounge and Brasserie at Maxine at the Catalina Hotel & Beach Club in South Beach have been the latest restaurant buzz.

The array of activities extends to Miami's sizzling nightlife. The exotic, international flair of the city shines brightest after hours, when models, rock stars and A-listers mingle with trendy locals in the swanky clubs.

Insider's Guide: The Best of Nightlife & Entertainment in Miami

Forget Skybar's stringent guest policy or the people-watching at the Rose Bar in the Mobil Three-Star Delano Hotel. Go downtown to I/O Lounge (30 NE 14th St) for the live music rhythms of Latin, funk, hip-hop, and reggae. The ultra-chic Prive was created for Miami A-listers; it's the place to spot celebrities and models (1235 Washington Ave).

South Beach may be world famous for its after-hours venues, but visit the in-the-know-party each Friday night on the private beach behind the Mobil Four-Star Mandarin Oriental,Miami (500 Brickell Key Dr), the newest place to see and be seen. The fun lasts from November to April and is a magnet for the young professionals who work in the area, which is also known as the Wall Street of the South.

After a night out on the town, you may want to spend the next day in relaxation mode. Go to the next page to find out how to find some peace and quiet in Miami.