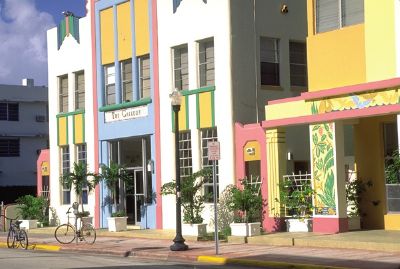 ©2006 Greater Miami CVB Miami's Art Deco district is truly unique. It's little wonder, then, that tourists flock to this area to gaze at the colorful buildings.

Starting in the 1920s, Miami became a playground for the rich and famous who traveled south to escape the harsh northern winters. Middle-class Americans soon followed, and the onslaught of visitors prompted the need for accommodations.

Fabricated from inexpensive steel and concrete, the buildings gained their personality from such flourishes and details as rounded corners, eyebrow ledges, glass block accents and nautical embellishments like portholes and sea motifs. The result was a fantastical assemblage of hotels that made ordinary vacationers feel prestigious and revered.

Over time, the area lost its luster until a group of visionaries in the 1980s set about to save the buildings from destruction. As investors and celebrities alike joined the cause, the Art Deco district and its updated look attracted new vacationers and became the backdrop for a number of television shows and movies, most notably "Miami Vice."

Today, South Beach has the distinction of being the nation's first 20th century district on the National Register of Historic Places, with more than 800 buildings of significance.

Insider's Guide: The Best of Architecture & Landmarks in Miami

You can scout Art Deco on your own by simply walking along Collins and Washington avenues, or you can go with the pros at the Art Deco District Welcome Center (1001 Ocean Dr). The center conducts 90-minute guided and audio self-guided walking tours of the 800 or so classic Art Deco buildings -- the largest collection in the world. Learn how these gems were salvaged from demolition.

Vizcaya Museum and Gardens (3251 S Miami Ave) is at the tail end of repairing damage sustained by Hurricane Wilma in 2005. The canopy in the gardens has already grown back, and except for a few pieces of statuary, this Italian Renaissance masterpiece is hardly worse for the wear. Built by International Harvester magnate James Deering in 1914, the villa showcases 34 rooms of furniture and decorative art from the 15th through the 19th centuries.

Coral Gables' Venetian Pool (2701 De Soto Blvd) is an 820,000-gallon freshwater pool surrounded by several Spanish style buildings, a garden patio, and grotto. See its beauty for yourself and why it's listed on the National Register of Historic Places.

Miami is a shopping mecca. In fact, you're never more than 15 minutes away from a major shopping area. On the next page, we'll tell you about Miami's shopping hotspots.