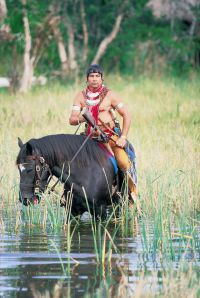 ©2006 Greater Miami CVB As the only subtropical preserve in North America, the Everglades are a must-see attraction for visitors to the Miami area.

One of the advantages of having such a diverse population in Miami is that every weekend some nationality has reason to celebrate. The result is an almost continuous celebration of holidays and festivals that tourists are more than welcome to participate in.

To think of Miami is to think of beaches and nightlife, but Miami is also a major sports town, with opportunities for both participants and spectators. If you can, schedule time for golfing, sport fishing, wreck diving, cave spelunking, skydiving, tennis or sailing.

One more attraction well worth precious vacation time is the Everglades. This River of Grass has shaped Miami's culture and geography as much as the beaches themselves. Spanning the southern tip of the Florida peninsula and most of Florida Bay, Everglades National Park is the only subtropical preserve in North America.

The Best of Special Events & Attractions in Miami

The Best of Special Events & Attractions in Miami

When in Miami, do as the Miamians do: Go to a Jai Alai game (3500 NW 37th Ave). Played on a 178-foot cancha, which is similar to a racquetball court but with one side open for an audience, this centuries-old game involves players hurling a hard ball at speeds up to 170 mph.

Players wear a wicker basket glove (cesta punta) and volley the ball back and forth; points are scored if the ball is dropped, juggled, bobbled or sent out of bounds. Originating in Spain, the game has flourished in the United States, especially with the increasing popularity of international sports.

You'll save a bundle on tickets, however, if you opt for a University of Miami college game. All of the university's major sports are played right on campus: Orange Bowl Stadium hosts football, the BankUnited Center is home to basketball, and baseball is played at Mark Light Field.

For a different type of sports day, visit the Flagler Dog Track and Entertainment Center (NW 37th Ave at 7th St). It's near the Miami International Airport and 15 minutes from South Beach. For free admission, you can sit in the open-air grandstands or an air-conditioned booth to watch greyhounds race daily over several specialized courses.

Trek inside the center to catch a game of poker, or learn how to play Texas Hold'em or other card games. Poker tournaments are held every weekend. If betting isn't your game, you can visit the track on weekends to find it doubling as the largest flea market in South Florida.

The wild monkey swimming pool and ape encounter at Monkey Jungle (14805 SW 216th St) are nothing new, but they are totally retro Miami. This attraction is a hands-down favorite, with an unusual setting that directs visitors through caged walkways while the 400-plus monkeys frolic in freedom.

You can watch big ships sail to sea from the vantage point of Bayside Marketplace (401 N Biscayne Blvd), an open-air 16-acre waterfront mall in downtown with more than 150 restaurants and shops, including Bubba Gump Shrimp Co., the Hard Rock Cafe, and the Mobil One-Star Mambo Cafe, which features a Latin and Cuban menu.

If you have no specific timeframe for travel, check out Miami's Summer Festival Season and plan your trip around a specific event. The Brazilian Film Festival, the Miami/Bahamas Goombay Festival, and the Tropical AG Fiesta are a few of the summer's offerings.

Given the catastrophic damage from hurricanes dealt to America's coastline in the past decade, it's easy to see why Americans are obsessed with this weather phenomenon. Miami, of course, has seen its share of volatile weather, making it a prime spot for the National Hurricane Center, Tropical Prediction Center, and Forecast Office. From January through May (the hurricane off-season), the center offers public tours that teach visitors about the causes and effects of hurricanes, as well as the center's various functions.

There's been quite a buzz lately regarding Miami's art scene. And, of course, this international city is perfect for tourists seeking some Latin flavor. See the next section for information on Miami's arts and culture.