Getting In, Getting Around Miami 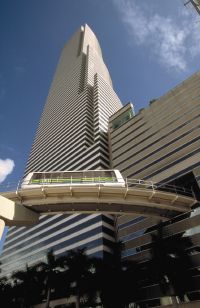 ©2006 Greater Miami CVB Metromover is a great way to get around the downtown area of Miami.

Navigating Miami can be quite difficult if you don't know what you're doing. Use these tips to ensure that you get where you want to go quickly and painlessly.

If you're flying into Miami International Airport, several transportation options make it fairly easy to get from the airport into the city. Mass transit bus service, metro-rail service, commuter train service, and a "downtown-specific" fixed-rail service connect the airport to locations throughout the metropolitan area. Taxis and shuttles, obviously, provide door-to-door service. Of course, you can also rent a car.

Whether you rent a car from the airport or drive into Miami on your own, buy a map. That's the best advice you'll get before venturing onto Miami's web of highways and causeways that crisscross between the mainland and the surrounding string of islands.

Add in confusing road signs, a flat landscape, bridges over the winding Miami River, and the thousands of international drivers, and it's easy to understand why knowing where you want to go before hitting the highway is imperative.

Fortunately, directions to the airport and beaches are well marked, and public transportation can get you to your destination, or at least in the vicinity thereof. It also helps to know that Miami Avenue and Flagler Street is the intersection for the city's four geographic sections. Flagler Street separates the north from the south, while Miami Avenue divides the east from the west.

Public transportation, fares: Miami public transportation is reliable and extensive, with 22 Metrorail stations spaced about one mile apart from Palmetto in the north to Dadeland South. The Metromover is downtown-specific, with 20 stations situated every two blocks. Metrobus covers the greater Miami area. Full fare for Metrobus and Metrorail is $1.50; Metromover is free.

Taxis, on foot, or by bike: As in other big cities, taxis are a viable option for time efficiency and schlepping heavy luggage to your hotel. However, because Miami is so spread out, biking or walking is not a realistic option unless you stay in a specific area. With the help of the Metromover, getting around downtown is relatively easy. The same goes with South Beach and Coconut Grove, both designed with pedestrians in mind. Most other cities in the metro Miami area are better suited for driving.

Now that you've learned the basics on how to get around Miami, take a look at the next section to find out about the city's many special events and attractions.