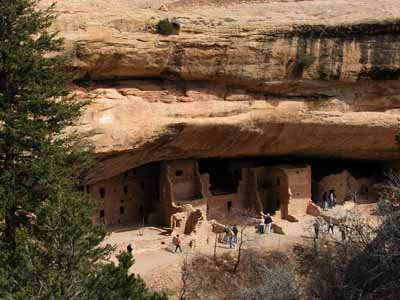 Mesa Verde National Park encompasses more than 4,000 prehistoric sites that were used by the Anasazi. Because of the dry climate, the cliff dwellings are very well preserved. They are located in sandstone canyons that slice the mesa into narrow tablelands.

The Anasazi built these dwellings in natural alcoves formed by water that had percolated down through the sandstone. When seeping water reached a denser layer of shale, it flowed horizontally through the canyon wall, eroding the cliff into deep, rounded shelters.

Several of the major cliff ruins are open to visitors, who reach them by trails, walkways, and steps that lead down from the mesa top. The silent stone and the mystery of the Anasazi create an experience most people never forget. Novelist Willa Cather experienced the ruins as "more like sculpture than anything else."

The majestic and ancient dwellings at Mesa Verde National Park are perfect backdrops for landscape photography. Here are some suggestions:

Exploring Spruce Tree House Spruce Tree House, Mesa Verde's best preserved ruin, is a fine example of Anasazi construction techniques and skillful stonework. You can reach the site by a short paved trail that crosses the canyon floor through a stand of Gambel oak trees, from which the Anasazi harvested nuts.

Believed to have housed 80 people, Spruce Tree House is about 200 feet long and contains eight kivas, three of which have reconstructed roofs. You can climb into one of the kivas through a smoke hole to get a sense of what the dark chamber might have been like during an ancient religious ritual. The dwelling was named by early explorers, who climbed down a tall tree -- which they mistakenly thought was a spruce -- to reach it.

Other equally remarkable and ghostly cliff dwellings in the park include Cliff Palace, the largest pre-Columbian dwelling in North America, and Balcony House. Perched high up in a cliff alcove, Balcony House was easily defended. Visitors to this site face the adventure of climbing up a 32-foot ladder and crawling through a tunnel on their hands and knees.

Mesa Verde has a long history of habitation, going back nearly 2,500 years. On the next page, read more about this area's ancient inhabitants and how more modern explorers discovered their abandoned dwellings.