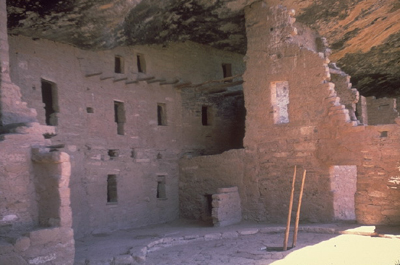 Mesa Verde National Park in southwestern Colorado, about 35 miles from Durango, has thousands of sites that were once inhabited by the Anasazi. Prehistoric dwellings like Spruce Tree House and Cliff Palace show how these ancient Native Americans developed a highly advanced civilization 800 years ago.

Other services: Museum, park lodge, and one campground

Mesa Verde National Park encompasses more than 4,000 prehistoric sites that were used by the people the Navajo call the Anasazi, or "Ancient Ones," who developed an advanced culture and suddenly disappeared hundreds of years ago. The structures and ruins include mesa-top pit houses and pueblos, as well as the ghostly, multistoried cliff villages for which the park is famous. The setting for these deserted ancient villages is what the early Spaniards called the "green tableland," or Mesa Verde.

Mesa Verde rises more than 2,000 feet above the surrounding Montezuma Valley. Because of its dry climate, the cliff dwellings are very well preserved. The park is a superb example of both an archaeological preserve and a splendid natural landscape. The top of the mesa is covered with forests of ponderosa, Douglas fir, Gambel's oak, and two-needled pinyon juniper. Scattered herds of mule deer are often seen among the high meadows at sunrise or sunset, as well as wild turkeys, red foxes, and coyotes. Wildflowers -- columbine, Indian paintbrush, and bluebells -- are abundant in the spring, and the fall colors -- especially the russet red of the Gambel oak -- are magnificent.

Although the "Ancient Ones" are long gone, you can still feel their spirits as you walk through these silent buildings that have stood for centuries in their rock alcoves far above the ground. The structures are startlingly intact, as if they are waiting for the return of their builders, who left suddenly about 700 years ago.

The dwellings the Anasazi left behind give modern visitors much to explore and experience. On the next page, learn about the sights you'll see when visiting Mesa Verde National Park.