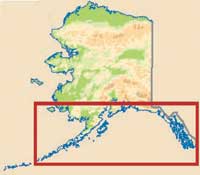 Alaska is best seen from a ferry. The only byway of its kind, Marine Highway lets you leave the driving to someone else as you travel scenic coastal routes totaling more than 8,000 miles.

From the southern terminus in Bellingham, Washington, the ferries ply waters lined with the lush, green rain forests of British Columbia and Alaska's Inside Passage. Voyagers pass glaciers and fjords in Prince William Sound and the windswept Aleutian Islands, rich in cultural, archaeological, and seismic history.

In southeastern Alaska, northbound travelers can end their sail in Haines or Skagway to connect to the Yukon or other Alaska scenic highways, such as the Haines Highway and the Taylor/Top of the World Highway. The mainline vessels are the Taku, Matanuska, Malaspina, Kennicott, and Columbia. These workhorses of the Inside Passage travel from Bellingham, Washington; Prince Rupert, British Columbia; and southeastern Alaska coastal communities.

Although you may not see much archaeology from the ferry, stops along the way offer a look at some of Alaska's most intriguing sites. Much of the archaeological evidence left behind is the work of native Alaskans, and some sites along the byway are of Russian and American origin.

Petroglyphs can be found on the byway near Kodiak, near Petersburg in the Tongass National Forest, and in Sitka. In Wrangell, visitors will be delighted to find Petroglyph State Historic Park, where beautiful circles and designs are carved into large stones.

A short hike from the ferry landing takes explorers to a collection of more than 40 petroglyphs from an unknown time and culture, even though the native Tlingit people could be descendants of the artists. Archaeologists have made guesses about the significance of the designs on the boulders, but the petroglyphs could be anything from artwork to a record of the past.

In Ketchikan, archaeology and today's cultures come together at the Totem Bight State Historic Park. When native people left their villages to find work in the new towns in Alaska, they also left behind collections of totem poles. During the 1930s, the Civilian Conservation Corps (CCC) came to salvage what was left of these totem poles and re-create what had been lost.

An even more recent archaeological excavation began at Sitka in 1995 to uncover Baranof Castle, built in 1837.

Alaska's native cultures have been joined over the years by Russian and American cultures to create a rich history and a thriving present.

The lives of residents, along with the industries that allow them to survive in the Land of the Midnight Sun, are around every corner as you enjoy the decks of the ferry or the streets of one of Alaska's towns. Alaska's Marine Highway takes you through fishing villages and historic towns.

Nearly every stop on the byway reveals more history of the native Alaskans who have lived here for centuries. The native people celebrate festivals and wear authentic clothing. Feasts and festivals that involve dancing, singing, arts, and crafts traditionally occur during the winter, when all the work of the summer has been done. Many of the festivals are held in honor of animal spirits. The festivals and traditions you witness on the byway may be the most memorable part of your trip.

The history of Alaska dates back to unrecorded times, when the first native Alaskans were just getting used to the beautiful, yet extreme, territory in which they lived. Over many centuries, Alaska has come to be appreciated by different cultures that wanted to stake a claim in the area. As you travel along Alaska's Marine Highway, each port unravels more of the past.

Kodiak Island was the site of the first permanent Russian colony in 1784. The same Russian trappers who were willing to brave the elements in Siberia were also willing to settle the land across the Bering Strait if it meant finding more furs.

As settlement progressed, a Russian Orthodox mission was established to keep peace between native peoples and the Russians until the parcel of land was sold to the United States. Today, towns such as Sitka, Unalaska, Seldovia, and many others display pieces of Russian history and influence in Alaska.

Development in Alaska really began in 1867 when "Seward's Icebox" became a U.S. territory. News of gold in the Arctic spread like wildfire, and prospectors gathered in mining communities to try their luck. Ketchikan became the gateway to the Klondike Gold Rush, and Skagway became the destination.

Skagway still maintains its reputation as a gold rush town with the Klondike Gold Rush National Historic Park. All through the Inside Passage and on to southcentral Alaska, miners established communities in places that promised wealth. Some were successful, and many were not, but stories of Alaska were told far and wide in the lower 48 states.

The first tourists to Alaska usually took a steamship on a route developed along Alaska's Inside Passage to see the mystical northern territory and its glaciers and dense forests. Traveling along the coastline remains one of the favorite ways to see Alaska, and Alaska's Marine Highway has preserved the sightseeing tactics of the first Alaskan tourists.

View Enlarged Image This map points out the highlights of Marine Highway for sightseers.

Some of the unique wonders of the world are clustered in the northern corner -- a very large corner -- known as Alaska. Filled with majestic sea creatures, geological movements, and land overrun with glaciers and forests, Alaska's scenic coastline abounds with natural beauties. In the daylight, you may see a whale as it splashes its tail against the water. At night, the Northern Lights may fill the sky.

As you travel along the shores of Alaska, you observe the unspoiled natural features of the north. Alaska's Marine Highway travels through the Tongass National Forest and along the Chugach National Forest, allowing you to get a good look at both the land and the sea. These beautiful water passageways display rock outcroppings, forest-covered mountainsides, and glaciers.

The state has about 100,000 glaciers, most located on the coast. Also notice the smoldering islands along the Alaska Peninsula. These islands are part of the Pacific "Ring of Fire," where underwater volcanoes create island volcanoes that can be seen from the ferry.

Few byways offer a view of such fascinating sea creatures. Whales, seals, fish, and seabirds are all an integral part of an experience on Alaska's Marine Highway.

Stop in Seward to visit the Alaska SeaLife Center, where interactive displays tell all about Alaska's wildlife. Both baleen whales and killer whales can be spotted at Glacier Bay National Park and Preserve. At Kodiak Island, nearly two million seabirds live along the shores, while brown bears roam the spruce forests.

Recreation and adventure go hand in hand, and what is more adventurous than an ocean voyage? From the decks of the ships to the streets of each town to the trails of the forests, you'll find plenty of places to explore along Alaska's Marine Highway.

Nearly 98 percent of the land along the byway is publicly owned, which makes wilderness experiences and recreational opportunities virtually endless. While you ride the ferry, you can dine, lounge, and even camp on the decks.

One of the benefits of traveling Alaska's Marine Highway is being able to take your favorite recreational activities with you -- mountain biking, kayaking, hiking, or whatever other activities beckon along the coast. At each community, you'll find opportunities to get out and explore, with miles of trails, plenty of parks, and places to stay available at every stop.

Time to allow: One month

Considerations: Summer is the busiest season, so make reservations early. During the winter months, the frequency of trips to some communities is reduced. Keep in mind that fees vary from less than 50 dollars to hundreds of dollars depending on how far you go and whether you are bringing your car. 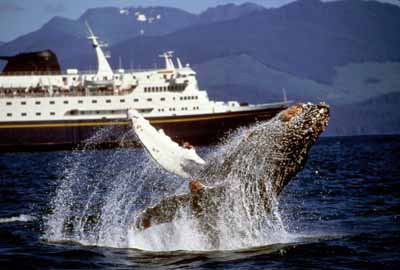