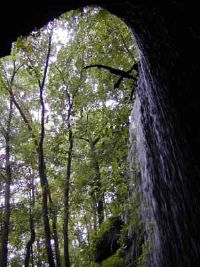 Visitors to Mammoth Cave National Park rarely see more than the 12 miles of passages that have been opened for tours. But professional spelunkers are still exploring the cave system, drawing new maps and charts, and opening up additional passageways, many of them little more than crawl spaces.

In 1972, a long-sought passageway was found that linked Mammoth Cave with the Flint Ridge cave system through Hanson's Lost River, an underground stream. Mammoth Cave has other subterranean waterways: Lake Lethe, the River Styx, and Echo River.

In a section of the cave reached by a spectacular underground passage called Broadway, there is a spot called Methodist Church, where religious services are believed to have been conducted in the early 1800s.

Visitors to this area today are treated to an experience much like that of earlier tourists. Cave guides turn off the lights and throw torches through the immense underground chamber, allowing visitors to see with their own eyes the way the cave looked before electric lights were installed.

Booth's Amphitheatre is an underground room once visited by Shakespearean actor Edwin Booth, the brother of Lincoln's assassin, John Wilkes Booth. Edwin Booth is said to have recited Hamlet's "To be or not to be" soliloquy here.

Nearby is a hole in the ground known as the Bottomless Pit. It was named by early guides, who apparently were not able to see all the way down to the pit's bottom with the weak light of their flickering lard-oil lamps. The "bottomless hole" is actually 105 feet deep.

The geologic wonder that is Mammoth Cave is replete with breathtaking photo opportunities. Here are some subjects for your consideration:

©2006 National Park Services Several different hiking tours through Mammoth Cave let visitors choose which sights they'd like to see and how  strenuous a spelunking expedition they're willing to undertake.

The half-day tour is extremely popular. Tour members enter the cave through the Carmichael Entrance that leads down to Cleaveland Avenue. This is a long tubular chamber carved out by underground water. Its walls glisten with white gypsum that has crystallized below the limestone surface. The tour passes through the Snowball Dining Room, where the group may stop for lunch. Afterward, the tour leads through Boone Avenue, a subterranean river chasm so narrow you can reach out and touch both walls. The tour ends at Frozen Niagara, a cataract of flowstone created as mineral-rich water seeps through the walls.

Mammoth Cave has captivated more than just modern visitors -- it's been a popular destination for the past 4,000 years. On the next page, read about the history of Mammoth Cave.