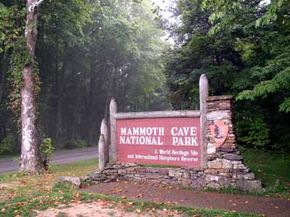 National Parks Image Gallery With more than 340 miles of mapped passageways, Mammoth Cave is the longest cave system in the world. Some explorers believe that much of the cave has yet to be discovered. See more pictures of national parks.
©2006 National Park Services

Mammoth Cave National Park -- located in southwestern Kentucky, about 90 miles from either Louisville or Nashville -- gives visitors a glimpse of how the earth's natural processes can form startling and amazing rock formations that are hidden away from the light of the sun. Hundreds of miles of underground passages make up Mammoth Cave, the world's largest cave system.

Other services: Three campgrounds and a park hotel

Beneath the forest-covered hills of southern Kentucky, you will discover the world's largest system of caves. There are about 360 miles of underground passages -- on five different levels -- that have been explored or mapped so far.

This cave is so vast and startling, its scores of passageways, rooms, and pits so rich in history, that it has been designated a United Nations World Heritage Site. The full extent of Mammoth Cave is still unknown. New caves and passageways are almost constantly being discovered, as the underground frontiers of this spectacular labyrinth extend deeper and deeper into a netherworld that almost defies belief.

The very names are enchanting -- flowstones, travertine, scallopes, flutes, and domepits. Gypsum flowers and dissolved carbonates. Sinkholes and disappearing springs. Vertical shafts, tubular passages, and open caverns. Even the basic field rocks of the southern Kentucky cave country have a certain natural poetry to them -- limestone, dolomite, sandstone, and shale.

Truly, Mammoth Cave is a place of beauty and wonder, mystery and paradox. In room after subterranean room there is an incredibly rich array of exotic forms: tapered stalactites and stalagmites, thick hanging draperies, lacy crystals, slender columns, and fluted shields. Hikers find themselves wandering through a sprawling realm of underground lakes and canyons, waterfalls and streams, and narrow side corridors and vaulted ballrooms. It is a weird landscape, a sometimes grand and occasionally grotesque place, a buried lost geological world that seems alternately to have come from a Walt Disney fairy tale or the off-kilter imagination of Edgar Allen Poe.

All of these extraordinary features can be found in Mammoth Cave National Park. Located about 50 miles northeast of Bowling Green, Kentucky, Mammoth Cave contains one of the world's largest and most diverse known systems of underground caverns. The haunting beauty of the place -- the mysterious sinkholes, the subterranean waterfalls, and the delicate gypsum cave formations -- will stay with you forever.

Sightseeing opportunities abound for visitors of Mammoth Cave National Park. Go to the next section for some sightseeing tips. 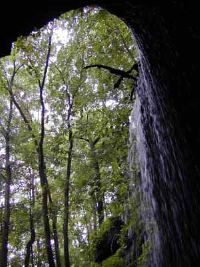 Visitors to Mammoth Cave National Park rarely see more than the 12 miles of passages that have been opened for tours. But professional spelunkers are still exploring the cave system, drawing new maps and charts, and opening up additional passageways, many of them little more than crawl spaces.

In 1972, a long-sought passageway was found that linked Mammoth Cave with the Flint Ridge cave system through Hanson's Lost River, an underground stream. Mammoth Cave has other subterranean waterways: Lake Lethe, the River Styx, and Echo River.

In a section of the cave reached by a spectacular underground passage called Broadway, there is a spot called Methodist Church, where religious services are believed to have been conducted in the early 1800s.

Visitors to this area today are treated to an experience much like that of earlier tourists. Cave guides turn off the lights and throw torches through the immense underground chamber, allowing visitors to see with their own eyes the way the cave looked before electric lights were installed.

Booth's Amphitheatre is an underground room once visited by Shakespearean actor Edwin Booth, the brother of Lincoln's assassin, John Wilkes Booth. Edwin Booth is said to have recited Hamlet's "To be or not to be" soliloquy here.

Nearby is a hole in the ground known as the Bottomless Pit. It was named by early guides, who apparently were not able to see all the way down to the pit's bottom with the weak light of their flickering lard-oil lamps. The "bottomless hole" is actually 105 feet deep.

The geologic wonder that is Mammoth Cave is replete with breathtaking photo opportunities. Here are some subjects for your consideration:

The half-day tour is extremely popular. Tour members enter the cave through the Carmichael Entrance that leads down to Cleaveland Avenue. This is a long tubular chamber carved out by underground water. Its walls glisten with white gypsum that has crystallized below the limestone surface. The tour passes through the Snowball Dining Room, where the group may stop for lunch. Afterward, the tour leads through Boone Avenue, a subterranean river chasm so narrow you can reach out and touch both walls. The tour ends at Frozen Niagara, a cataract of flowstone created as mineral-rich water seeps through the walls.

Mammoth Cave has captivated more than just modern visitors -- it's been a popular destination for the past 4,000 years. On the next page, read about the history of Mammoth Cave.

History: How Mammoth Cave Was Formed 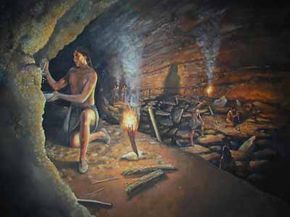 The underground wonderland of spectacular Mammoth Cave was formed, and is still being formed, as limestone, also called calcium carbonate, dissolves in water seeping through the ground.

This phenomenon is usually found where caves occur. Underneath the topsoil on the hills of southern Kentucky, there are two layers of stone. The upper is a sandstone cap that is 50 feet thick in some places. Like an umbrella, it covers the lower layer, a series of limestone ridges.

At places called sinkholes, surface water is able to penetrate the upper sandstone umbrella. As the water works its way downward, the limestone is eroded, forming the honeycomb of underground passageways, amphitheaters, and rooms that make up Mammoth Cave.

Many of the cave's internal features, such as stalagmites, stalactites, and columns, were formed this way. These formations build at the rate of about one cubic inch every 100 to 200 years.

People have been crawling through and living in the cave since prehistoric times. Anthropologists believe that Native Americans first discovered the great cave about 4,000 years ago. To light their way in the intense underground darkness, they fashioned torches from bundles of cane like that which still grows nearby. Charred remnants of these ancient torches have been found miles inside the cave in chambers lined with thousands upon thousands of gypsum crystals in myriad shapes. Apparently, these crystals were highly valued by the early spelunkers.

The cave also holds ancient footprints, undisturbed for centuries, as well as bits of clothing and abandoned sandals. Three miles from the cave entrance, the mummified body of a gypsum miner who died some 2,000 years ago has been discovered. He was crushed to death by a five-ton boulder. The man's body and his clothing are perfectly preserved.

Mammoth Cave was first discovered by white pioneers in the late 1790s, and guides have been leading astonished tourists through it ever since. During the War of 1812, the cave was mined near its entrance. Slaves did most of the work, filling large leaching vats with dirt and rock from the cave. The potassium or calcium nitrate crystals produced by this operation -- also called saltpeter -- were used to make gunpowder.

One of the earliest guides, Stephen Bishop, aptly described the cave as "grand, gloomy, and peculiar." He was a slave of the man who bought the cave in the 1830s, hoping to develop it as a major tourist attraction. Bishop explored and mapped many of the cave's rooms and passages. His assessment of the cave is almost as accurate today as it was 160 years ago. Park officials still do not overlight the cave's interior, guaranteeing that visitors never lose the feeling that they are deep within the earth.

Visiting Mammoth Cave National Park is a once-in-a-lifetime experience. The geology of this great cave has inspired awe in people for thousands of years.