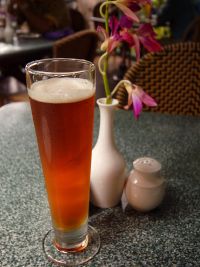 Los Angeles nightlife runs the gamut from bars to the most exclusive velvet rope experience available. Bar hopping is best in West Hollywood, Silver Lake, Venice Beach, and the Manhattan/Hermosa Beach area, as these are the only areas where there are multiple bars within walking distance of each other. On the club front, there's a huge variety, from the big, but sometimes cheesy clubs on Sunset to casual, sleek clubs like celeb-favorite Element (1642 Las Palmas Ave) in Hollywood.

On the music front, LA has a long and storied musical past, and is still regarded as a major music hub on the West Coast. From live local bands in the bars around Silver Lake to internationally renowned orchestras, ballets, and pop acts at UCLA's Royce Hall, and big-name acts at the Hollywood Bowl and the Greek Theatre, you can catch a wide variety of live music any night of the week in LA.

For a different kind of night out, this is also a great city for catching a comedy show. You can visit one of the clubs where some of the country's best comics got their starts and heckle the next Belushi.

The Best of Nightlife & Entertainment in Los Angeles

The Best of Nightlife & Entertainment in Los Angeles

The latest "it" (read: celebrity) hangout changes every six months or so in LA, but it also really depends on the night -- different nights are put together and promoted by different people, which means your favorite club one night could be your worst nightmare the next.

Nights also change fairly regularly, and some promoters float between a few different venues, so it gets pretty hard to keep track of after awhile.

These are all fun places when and if you get in, but they require a lot of effort that some people just aren't willing to put into a night out. The other 3 million-plus folks in the city check out cool up-and-coming bands at Spaceland (1717 Silver Lake Blvd) in Silver Lake. They also attend the bigger music shows at the Hollywood Bowl (2301 N Highland Ave), The Greek Theatre (2700 N Vermont Ave), or Royce Hall (100 Royce Hall).

Check out one of the city's popular burlesque clubs or the Mexican-wrestling-match-meets-cabaret extravaganza that is Lucha Va-Voom at The Mayan (1038 South Hill St).

Between its beaches, golf courses, and elegant spas, Los Angeles is a great place to get away from it all. On the next page, read our guide to relaxing and unwinding in Los Angeles.