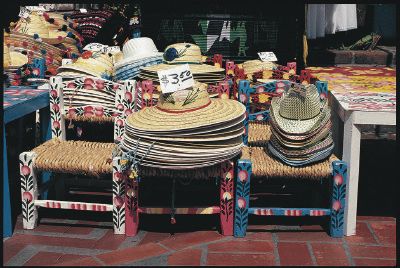 ©2006 Richard Carroll Visitors to Los Angeles will find all sorts of shopping selections -- and some of them, like these hats, actually are reasonably priced.

From local boutiques to the country's best known upscale shopping district -- Rodeo Drive -- Los Angeles has something for every type of shopper. As the local Fashion Week gains more credibility, local designers are sticking around instead of running off to New York, which has made for an increase in local designer boutiques over the last few years. Of course, LA is known best for its casual wear and you can still find plenty of it, from hundreds of jean brands to swimsuits all year-round.

The Silver Lake and Echo Park kids find their hip threads at any number of thrift, vintage, and cutting-edge boutiques throughout the city, and many a squeal-worthy treasure can be found at some of LA's best flea markets. Like everything else in LA, it's a good idea to plan your shopping trip by neighborhood. Each neighborhood tends to offer a different sort of shopping experience, and luckily there are several neighborhoods with dozens of boutiques to choose from, so you don't have to spend half the day in your car getting from one shop to another.

Insider's Guide: The Best of Shopping in Los Angeles

When you're done with the boutiques, head to the Original Los Angeles Farmer's Market (6333 West 3rd St) for excellent souvenirs, food, and people watching. In addition to the produce, meat, and cheese vendors, there are a number of dining options, a couple of bars, and dozens of specialty shops. Usually packed with people (but in a good way), this is an excellent place to spend an afternoon soaking in the friendly chatter of LA.

To the east, the hipster triumvirate comprised of Los Feliz, Silver Lake and Echo Park is loaded with stores, and probably the best place to get something a little edgy in Los Angeles. Lots of local designers set up shop here, because what the cool kids wear here tends to dictate fashion in the rest of the city. Not to be missed in this area are Steinberg & Sons (4712 Franklin Ave, Los Feliz), Show Pony (1543 Echo Park Ave, Echo Park), and The Circle (2395 Glendale Blvd, Silver Lake).

Near the beaches, Santa Monica and Venice Beach have plenty of shopping between them to eat up a day. Fred Segal (500 Broadway) is a must-see, as much for the layout and the scene as the actual stock, although that's all good too -- nationally and internationally known labels, and some great up-and-coming designers as well.

They also have a West Hollywood location on Melrose. In Santa Monica, shopping is on and around Third Street, Ocean Park Boulevard, and Montana. In Venice, most of the shops are on Abbot Kinney. Manhattan Beach also has some small quiet boutiques worth checking out if you've got time and energy left at the end of the day.

As you might expect, Los Angeles nightlife is incredibly diverse and offers something for everyone, from orchestra and ballet performances to classy clubs where you might spot a celebrity or two. Keep reading to learn more about LA's nightlife and entertainment.