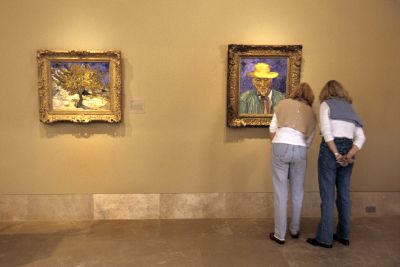 ©2006 Robert Landau At Los Angeles' Norton Simon Museum of Art, visitors see a wide selection of art from around the world and across several centuries.

Given its reputation as a fame-obsessed beach town, Los Angeles has a surprising number of quality art museums and galleries. In order to beef up attendance and give the area's thousands of struggling actors, artists, writers, musicians, and students a break, many of them offer free admission all the time or on certain days of the week or month. West Hollywood and Silver Lake are home to quite a few local galleries, and others, like the Brewery Project, are scattered throughout the city.

The large supply of actors in Los Angeles means a packed theater schedule of top-quality performances run throughout the city's theaters, including both up-and-coming actors and very well-known film stars. Theaters run the gamut from old and established like the Pasadena Playhouse to newer and modern like the Geffen Playhouse in Westwood.

Insider's Guide: The Best of Arts & Culture in Los Angeles

Insider's Guide: The Best of Arts & Culture in Los Angeles

This city is fantastic for museum lovers, with several great museums at bargain prices. The Museum of Contemporary Art always has something interesting for modern art fans at one of its three locations (250 South Grand Ave and 152 North Central Ave downtown, and the Pacific Design Center at 8687 Melrose Ave in West Hollywood). Admission is free from 5 to 8pm Thursdays.

With more than 100,000 works, the Los Angeles County Museum of Art (5905 Wilshire Blvd) is the largest encyclopedic museum west of Chicago. The museum's exhibits run the gamut from European masterpieces to a major Islamic art collection to cutting-edge contemporary art from around the world. Admission is always free after 5 pm. The museum is open until 8 pm every day except Friday, when they're open until 9 pm, and Wednesday, when the museum is closed. The museum is open all day on the second Tuesday of each month.

Admission to the J. Paul Getty Museum at the Getty Center (1200 Getty Center Dr) is always free. It's worth paying the $7 parking fee, though, to see the Getty collection and the stunning center.

The Hammer Museum at UCLA is free throughout the summer, and on Thursdays the rest of the year, making it one of the best deals going in LA. Admission is $5 for adults the rest of the time. Their permanent collection houses a little bit of everything from art's past like Picasso drawings, Impressionist paintings, and a 19th century sculpture. Their exhibitions range from post-Impressionist paintings to graffiti murals.

The Norton Simon Museum of Art (411 W Colorado Blvd, Pasadena) displays a wide selection of European, American, and Asian art. Make sure to visit its 14th to 16th century European paintings, 19th century impressionists, and 20th century American artists. If you have time, check out the showcase of recent gifts in the New Acquisitions exhibit.

There are also some excellent theaters in Los Angeles, some of which double as architectural landmarks, like the Pantages Theater (6233 Hollywood Blvd) in Hollywood, the Orpheum Theater (842 S Broadway) downtown, and the Pasadena Playhouse (39 S. El Molino Ave). Other theaters known for their great productions include the Geffen Playhouse (10886 Le Conte Ave) in Westwood, and the Ahmanson Theater and the Mark Taper Forum (both located at 135 North Grand Ave,) in downtown.

Los Angeles is a city with some daring and forward-thinking architecture, including historical landmarks and buildings designed by the likes of Frank Lloyd Wright and Frank Gehry. On the next page, learn more about LA's architecture and landmarks.