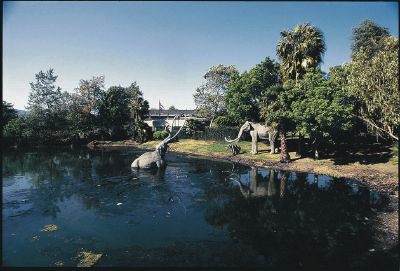 ©2006 Richard Carroll The La Brea Tar Pits, which are pools of hot tar bubbling up from the Earth's surface, have been trapping animals for thousands of years. They are the world's best known site for Ice Age fossils.

Between its multicultural population, its history as a center of entertainment, and its natural surroundings, Los Angeles has special events and attractions for everyone. Outdoor enthusiasts can walk, run, bike, or skate along the waterfront, hike in the hills, and kayak or swim in the ocean.

There are dozens of sporting events going on all the time in Los Angeles, including the university teams and the pro teams. Everyone can enjoy the city's revolving schedule of cultural events, from the dozens of TV screenings scheduled daily to LA's fashion week to neighborhood events like the Cherry Blossom Festival each spring in Little Tokyo. For younger visitors, or the young at heart, there are also two of the country's most iconic amusement parks -- Disneyland and Hollywood Studios.

Chances are, you're not going to have time to cram it all in, but with a little planning and a good map, you should be able to catch a glimpse of why so many people put up with that traffic.

Most visitors to Los Angeles are at least mildly intrigued by its celebrity quotient, if not totally obsessed. For some, it's enough to be part of the live studio audience at The Tonight Show, others can hang out at the Mobil Three-Star Chateau Marmont (8221 Sunset Blvd) hoping to catch a glimpse of one of the hotel's revolving list of celebrity guests. This is the go-to place for celebrity interviews (pay attention next time you're reading one of those celebrity profiles -- 8 out of 10 include a reference to meeting at the Chateau), and even those not staying here like to hang out at the bar or pool.

Disneyland (1313 Harbor Blvd) is still a magical place, even after all these years, in fact, maybe because of all these years. There's a charming nostalgia to it that you just don't get at Disney World in Florida. Be sure to check out Pirates of the Caribbean, the only amusement park ride to ever inspire a movie and not the other way around.

Universal Studios Hollywood (100 Universal City Plaza, just north of downtown Los Angeles) is also good fun, especially if you're at all interested in seeing how a movie set operates. For a bit more realistic view, try the two-hour tour of Paramount Studios (5555 Melrose Ave, West Hollywood). Although other studios offer tours as well, Paramount is the only studio still operating in Hollywood, and it's been at the same location for several decades, so it's has a more historical vibe than the others. Just $35, they really do take you behind the scenes, so the tour changes daily depending on what's taping. If you haven't spotted a celebrity on the tour, head to the studio's commissary for lunch -- actually, head there anyway for its historical value and good food, the celebrities are just icing on the cake.

There are plenty of cheesy tourist attractions along Hollywood Boulevard, but the only two really worth checking out, mostly for their history, are Grauman's Chinese Theatre (6925 Hollywood Blvd) and the Hollywood Walk of Fame (Hollywood Boulevard and La Brea Ave). Even for locals it's hard to resist doing the tourist thing and seeing which star's hands are most similar to yours.

Other fun spots for a lively afternoon include Chinatown (900 N Broadway), especially during Chinese New Year, which usually begins in late January and lasts a month and Little Tokyo (1st St between Main and San Pedro Sts, Los Angeles) during the Cherry Blossom Festival.

Finally, every kid who grew up within a 100-mile radius of LA remembers field trips to the Los Angeles Zoo (5333 Zoo Drive), the Griffith Observatory (2800 E Observatory Rd), and the La Brea Tar Pits (5801 Wilshire Blvd). The zoo is a nice place to wander around, even if you're not so into zoos. They've done a good job making the animals comfortable in as close to their natural habitat as possible, and the zoo is full of big wide shade trees that keep it relatively cool.

Griffith Park (4730 Crystal Springs Dr) itself is worth seeing, especially for hikers, who will appreciate its 53 miles of hiking trails, streams, and sweeping views of the city. The Griffith Park Observatory, housed in a cool 1930s dome-shaped building, is a perfect spot to head at sunset for great views followed by star-gazing (hard to come by in smoggy LA).

The La Brea Tar Pits are a bizarre and interesting phenomenon -- these pools of hot tar bubbling up from the Earth's surface have been trapping thirsty animals (bubbling in the sun, they look like water) for thousands of years, making them the world's best known site for Ice Age fossils. Through windows at the onsite Page Museum Laboratory, visitors can watch bones being cleaned and repaired. Outside the museum and next to the tar pits in Hancock Park, life-size replicas of several extinct mammals are featured.

Blinded by all the glitz and glamour LA has to offer, you might forget to look for the city's arts-and-culture scene. Keep reading for our guide to arts and culture in Los Angeles.