Getting In, Getting Around Los Angeles 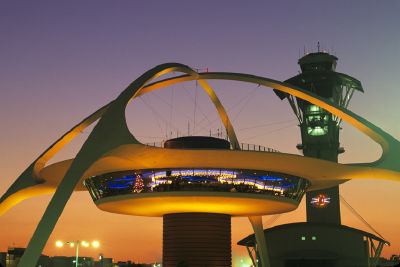 Finding your way around Los Angeles seems like a Herculean task, but it's not as bad as you might think. There are plenty of options for navigating LA, from taxis and rental cars to buses and trains. Here's a transportation primer:

There are several airport options for Los Angeles -- Los Angeles International Airport (LAX); Bob Hope Airport in Burbank (BUR, northeast of LAX, closer to Downtown and Hollywood); John Wayne Airport in Orange County, 40 miles south of LA (SNA); Ontario Airport, in the Inland Empire, 35 miles east of LA (ONT); and Long Beach Airport (LGB). LAX, Burbank, or Long Beach airports could be the closest ones to your destination, depending on what part of the city you're in (LAX is west, Burbank is east, and Long Beach is south). John Wayne Airport is about 40 miles south of LA in Orange County.

Rental Cars From the Airport

At Los Angeles International Airport, Advantage, Alamo, Avis, Budget, Dollar, Enterprise, Hertz, Fox/Payless, National, and Thrifty offer car rentals. Rental centers are all off-site, and each company has their own shuttle to take passengers from the airport to the rental center.

At Bob Hope Airport in Burbank, Alamo, Avis, Hertz, and National have counters in the terminals. Budget, Advantage, Enterprise, Discovery, AllRite, and Rent4Less have rental centers off-site and provide shuttles to and from the airport.

Airport, Alamo, National, Enterprise, Fox, and Hertz rent cars from the Long Beach Airport. The Rental Car Center is located a few miles away from the airport, and a rental car shuttle makes regular trips between the two.

Public Transportation From the Airport

Buses, trains, and shuttles are public transportation options depending on which airport you decide to use for your visit. A majority of hotels in the area provide free airport shuttles for their guests (within reason), so be sure to ask about it when you make your reservation. Door-to-door shuttles are a good option when you're traveling longer distances.

From Los Angeles International Airport: Free shuttle bus service is provided from the Aviation Metro Rail Station. Passengers wishing to use this shuttle bus service should wait under the LAX Shuttle & Airline Connections sign on the Lower/Arrival Level islands in front of each terminal, and board the "G" Shuttle. Passengers also can take the "C" Shuttle from the same pick-up point to get to the Metro Bus Center, where they can board city buses serving the Los Angeles area.

Information on city bus services is available on the Information Display Board in the baggage claim area in each terminal. In addition, passengers can obtain local transit information by calling (800) 266-6883.

Two shared ride van companies, PrimeTime Shuttle and SuperShuttle, operate out of LAX and are authorized to serve all Southern California counties. Prices run $20 to $55 per person, depending on your destination.

From Burbank Airport: Metrolink (Mon-Fri only) and Amtrak have a combined station within walking distance of the main terminal (free shuttle also is available). The airport is a stop on MTA (www.mta.net) bus lines and the Burbank Bus, which connects with Downtown Burbank and the Metro Red Line in North Hollywood.

SuperShuttle also operates out of Burbank Airport, as does Primetime and Road Runner, all for $20 to $55 per person depending on destination.

From Ontario Airport: You can pick up an OmniTrans bus to eventually make it downtown or to a MetroLink station, but it's fairly time-consuming.

SuperShuttle, Primetime and LA Xpress Shuttle all operate out of Ontario, with the same $20 to $55 per person fare, although Xpress Shuttle's prices are consistently a few dollars cheaper.

Primetime and Roadrunner shuttle companies serve the Long Beach Airport for a cost of $20 to $55 per person.

A number of door-to-door shuttles operate out of John Wayne Airport, including ABC Shuttle, Primetime and SuperShuttle.

Taxis From the Airport

Most cab companies charge flat fees for getting you from the airport to certain locations in and around Los Angeles. Knowing ahead of time how you can get out of the airport and to your destination can make your trip more relaxing. Cabs are a fairly reasonable option when you're traveling short distances.

From Los Angeles International Airport: There are always cabs available at the taxi stand right out in front of the terminal. Typical fares cost about $35 to Hollywood and Downtown LA, $25 to Beverly Hills, $20 to Santa Monica, and $45 to $60 to the Valley and Pasadena, including a $2.50 service charge for rides originating at LAX.

From Ontario Airport: Travelers can find taxicab service at the curbs outside of the baggage claim areas. All taxicabs must be equipped with a dashboard meter or rate card, which is plainly visible to all passengers in the front and back seats of the vehicle. Service is available on a walk up basis from Bell Cab Company (800-340-8294) and Yellow Cab Company (800-305-8294).

Rush hour: Whether you rent a car from the airport or drive in to Los Angeles in your own car, make sure you have a map with you, and try to study it a bit before you get behind the wheel. A word to the wise -- the 405 Freeway is notoriously backed up, as is Santa Monica Boulevard, so try to avoid them if you can. Also try to avoid driving during rush hours (7 to 9 am and 4 to 7 pm) if possible.

There are several routes into Los Angeles for those who are taking a road trip. Interstate 5 enters the state from the north, Interstate 10 enters from the east (it begins across the country in Jacksonville, Florida, and ends in Los Angeles), and U.S. 101 is a scenic route that follows the west coast from Los Angeles to the Oregon state line. The California 1 (Pacific Coast Highway) is also an option, but it's the slowest possible route from the north. The advantage, however, is it's an incredibly beautiful drive that hugs the coast and offers plenty of scenic photo ops.

The majority of flights land at Los Angeles International Airport. From the airport, take Sepulveda Boulevard north, and follow the signs to California 1 (Pacific Coast Highway) for Santa Monica, Venice Beach, and Malibu.

Take Sepulveda south to California 1 south for Redondo, Hermosa, and Newport Beach. For Beverly Hills or Hollywood, take Century Boulevard out of the airport and get on the 405 north, then exit on Santa Monica Boulevard. East, for Downtown or Pasadena, take Sepulveda Boulevard south, then the 105 East to the 110 North.

Rules of the road: It's really difficult to get around Los Angeles without a car (hence all that traffic and smog). We highly recommend you rent one, unless you're on a very tight budget or have plenty of time and don't mind meandering routes. Unfortunately, as much as the city has been built with the car in mind, driving here is a hassle. I can't emphasize enough how important it is to have a map. It's very easy to get twisted around and lost.

Public transportation: Public transportation isn't exactly LA's strong suit, but there are a few bright spots. Santa Monica's Big Blue Bus is a great way to get around the beach towns, and taking the MTA Metro to downtown is a fairly smooth process.

The MetroLink trains are also clean, reasonable, and easy ways to get from outlying areas into LA. The city is now pumping much-needed funding into the citywide light-rail system, so there may be a day of smooth public transport in LA yet.

Taxis, on foot, or by bike: Destinations are spread out in Los Angeles, which makes taxis impractical and expensive unless you're going a short distance. Taxis aren't typically circling the block the way they are in New York, Chicago, or San Francisco. Unless you're at an airport or a hotel, you'll probably have to call a cab. Some good options are Yellow Cab (562-435-6111) or LA Taxi (213-627-7000).

Within neighborhoods like Santa Monica, Venice Beach, Hermosa, Manhattan, Redondo, and Silver Lake, the best way to discover all the area has to offer is to wander around on foot, or bike between neighborhoods (from Hermosa to Manhattan or Venice to Santa Monica is no big deal). Ambitious bicyclists can stick to the oceanfront routes for a long and pretty ride.

Los Angeles is famous for its attractions and special events, including the ever-popular Disneyland. On the next page, read about the things to see and do while visiting Los Angeles.