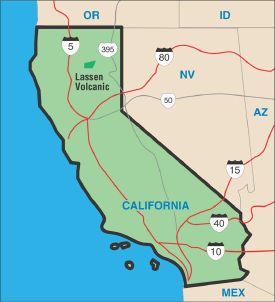 Volcanism displays its spectacular and destructive artistry in this vast panorama of devastated landscape. Lassen Volcanic National Park in Northern California is evidence of the incredible violence that occurs below the surface of our planet. The last eruptions here took place early in this century, but Lassen still has an otherworldly terrain of broken mountains, scorched land, bubbling mud pots, and hissing steam.

In 1914, Lassen Peak, about one hour east of Redding, California, began a period of sustained eruptions that continued for seven years. Eventually more than 106,372 acres of this decimated landscape were designated as the Lassen Volcanic National Park. Some of the landscape is still geologically active, with boiling water, hot streams, fumaroles, sulfur vents, and steam holes.

Lassen is at the southern end of the Cascade Mountains, which contain other volcanic peaks, such as Mount Rainier, Mount Shasta, and Mount St. Helens. This national park is a churned-up landscape of stark features that have been given such descriptive names as Chaos Crags and Chaos Jumbles. At one spot, intriguingly called Bumpass Hell, powerful-smelling vapors drift over boiling hot springs with golden flakes floating on their surface. The flakes are crystals of iron pyrite, or fool's gold, that have been carried along by superheated steam.

Lassen Peak itself is a craggy massif that rises to the considerable height of 10,457 feet. Much of the park presents a familiar northern California scene -- aspen, firs, pines, willows, alders, poplar, shrubs, and wildflowers. Resident fauna ranges from black-tailed deer to mountain lions. Yet throughout the park, cinder crags and magma canyons continue to offer proof of former violence, while gurgling thermal features suggest the possibility of a fiery future.

As is also true of a large portion of northern California, the park is covered with deep snow for much of the year, which has had the effect of producing several beautiful lakes. 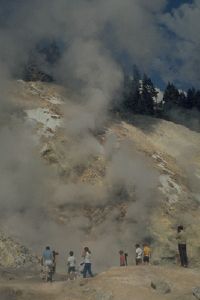 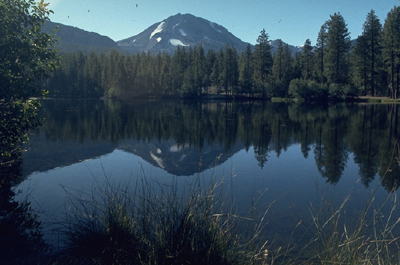