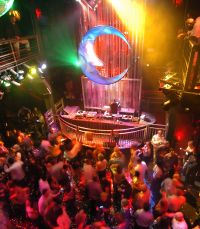 Anywhere you go there's something going on at night in Las Vegas. From a hot craps game that has attracted a crowd to "flair" bartenders who flip and throw the bottles in the air, you'll find most anyone is up for anything in the nightlife atmosphere.

If you're interested in seeing a Las Vegas show, talk with your hotel's concierge about securing tickets because some shows sell out months in advance, but hotels often have tickets for their guests. Otherwise, you can try to track down tickets on your own through various ticket-selling Web sites.

If you want to hang out where the locals go, you may have to get off the beaten path and travel to some out-of-the-way places. There are always the ultra-lounges, such as Tabu at MGM Grand and Light at Bellagio, for celebrity sightings, top DJs spinning house music, and dancing until the wee hours. But these can be expensive and rather boring if the crowd is dull. The party in Vegas doesn't get started until at least midnight, when most of the production shows have closed for the night.

Insider's Guide: The Best of Nightlife & Entertainment in Las Vegas

Pure nightclub at Mobil Three-Star Caesars Palace (3570 S Las Vegas Blvd) is where many up-and-coming rappers and pop musicians hop onstage to sing the praises of their latest single, hoping for ink in the morning papers as well as feedback from fans.

One of the latest clubs to make a mark on the scene is the 10,000-square-foot Tao nightclub at Mobil Four-Star Venetian (3355 La Vegas Blvd South). Paris Hilton, Lindsay Lohan, Chloe Sevigny, and others make it a point to check out Tao's connected Bistro for a bite before hitting this cavernous club's dance floor. The resident DJs spin house music and hip hop.

The Rain Las Vegas nightclub inside the Mobil Three-Star Palms Casino Resort (4321 W Flamingo Rd) has guests walking through a futuristic tunnel and exiting onto a dance floor highlighted by a state-of-the-art light system. The sound system is kicking, and you can dance the night away while passersby check you out through a wall of windows facing The Strip.

Jet, inside the Mobil Three-Star Mirage Casino and Hotel (3400 Las Vegas Blvd), is an ultra-modern, sleek nightclub featuring three dance rooms -- one for rock/hip hop/and dance, the second for house music, and the third for eclectic mixes. When you get thirsty, you can go to any of the four full-service bars.

Dance into the wee hours at Studio 54 nightclub at the Mobil Three-Star MGM Grand (3799 Las Vegas Blvd). This nightclub puts a modern twist on the classic nightclub by offering retro, progressive, and top-of-the-chart dance music on four dance floors. When you need to take a break, you can watch live dancers, wall walkers, or bungee jumpers. The 22,000-square-foot nightclub includes seven semi-private lounges, but you must be 21 or older to enjoy all that the facility has to offer.

The Foundation Room inside the Mobil Three-Star Mandalay Bay Hotel (3950 Las Vegas Blvd) is usually exclusive, but it's open to the public for an after-hours "Godspeed" party on Monday evenings. DJs play some of the hottest sets while guests dance or enjoy the view of The Strip or eastern Las Vegas Valley from the 43rd floor balcony.

The Beauty Bar (517 Fremont St) is a trendy, retro-cool bar with a 1950s beauty salon decor. The 2,100-square-foot location is always jumping with live DJs every night and a funky, soul party hosted the first Friday of the month.

The Strip may be where you get your groove on, but for serious local flavor, the Double Down (4640 Paradise Rd), two blocks from The Strip, has it hands down. This bar is home to local musicians, artists, photographers, and writers, as well as out-of-towners in the know. The drinks are reasonable, and the jukebox rocks with every genre of music.

Sushi Roku inside the Forum Shops at Mobil Three-Star Caesars Palace (3500 Las Vegas Blvd South), and its sister restaurant next door, the newly opened BOA Steakhouse (3500 Las Vegas Blvd S), were designed to capture the essence of the hip, young Hollywood dining experience. Sushi Roku is known as a celebrity haunt that attracts such stars as Janet Jackson, Britney Spears, and Charlize Theron.

For comedy, there are two clubs that feature up-and-coming and well-known stand-up comedians. The Improv at the Mobil Three-Star Harrah's (3475 Las Vegas Blvd South) and The Comedy Stop at The Tropicana (3801 Las Vegas Blvd South) both will cost you less than $30 per ticket, which includes two free drinks.

Need an Elvis fix? Legends In Concert at The Imperial Palace (3535 Las Vegas Blvd South) has one of the best shows on The Strip, and the cast includes impersonators portraying Prince, Tina Turner, Britney Spears, The Temptations, and Jay Leno.

After a few late nights of gambling in the casinos, you may be in need of some downtime. Go to the next page to learn about some of the best places for relaxing and unwinding in Las Vegas.