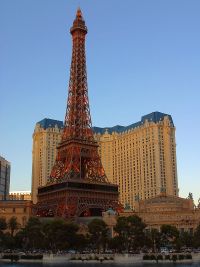 ©2006 PDPhoto.org It may not be the real thing, but this scaled-down version of the Eiffel Tower at the Paris Las Vegas Casino Resort is a cool landmark.

It's difficult to find many historic buildings in Las Vegas, especially on the The Strip, because this town tries to reinvent itself every few years. Hotel and casino owners are known for imploding older buildings, like the historic Dunes, Sands, Hacienda, Landmark, and Aladdin hotels to make way for the new. This is mainly because land and water are so precious along The Strip, and casino moguls attempt to build the best and most modern to continue to attract tourists and top each other in the race to be the next big thing.

The downtown Las Vegas area, however, has several older buildings with some even listed on the National Register of Historic Places. Some of those buildings include the Old Mormon Fort, the Fifth Street School, and the Art-Deco architecture of the first Las Vegas High School.

Insider's Guide: The Best of Architecture & Landmarks in Las Vegas

A group of Mormon missionaries built the adobe fort close to the Las Vegas Creek in 1855. It was abandoned a few years later, but a remnant of the original fort remains, serving as a visitor center with displays and historical information. There are series of programs throughout the summer that are perfect for families to enjoy times gone by.

The Golden Gate Hotel (1 Fremont St) was originally built in 1906 and was the site of the first telephone in Las Vegas. Just a few blocks away is the stunning Old Post Office building (301 Stewart Ave). This neoclassical structure was erected in 1931 as part of the government's New Deal building projects during the Great Depression. In the 1950s, this building was used as a federal courthouse where hearings on organized crime were held. Today the building serves as a museum and art gallery.

The Las Vegas Academy of Performing Arts (315 S Seventh St) was once home to Las Vegas High School, the only secondary school in the area until the 1950s. The building still is a great example of art deco architecture with its concrete cast and stucco friezes depicting animals, vegetation, and medallions.

A dozen Railroad Cottages (between Second and Fourth Sts and Clark and Garces aves) still remain out of 64 originally built around 1900. Railroad workers used the bungalow-style homes before World War I. These homes are recognized as a national historic district.

El Portal Theatre (310 Fremont St) was home to the city's first movie theater. The hacienda-style theater once held leather seats and a large movie screen but has been converted into a gift shop.

El Cortez Hotel and Casino (600 Fremont St) was once owned by gangster Bugsy Siegel, but he sold it in the 1940s to pay for construction of the Mobil Three-Star Flamingo Hotel.

The Huntridge Theatre (1208 E Charleston Blvd) was a premiere movie house in the 1940s and was visited by such celebrities as Jerry Lewis and Abbott and Costello. The building is one of the few standing examples of modern-style buildings and was used as a place for live music performances in the early 1990s. The building is currently closed with no known plans for reopening.

Celebrities and locals have attempted to build a historical memorial to old Las Vegas, particularly the neon signs of the mid-20th century, along Fremont Street and in the downtown area. Although it's currently closed, you can see the exterior of the famed Moulin Rouge Hotel and Casino (900 W Bonanza Rd), opened in 1955 for only a quick five months. It was Las Vegas' first interracial entertainment facility and attracted members of Frank Sinatra's Rat Pack, the Platters, Maurice and Gregory Hines.

Over the years, minor celebrities and major city officials have attempted to revive the Moulin Rouge. But in 2003, just as its doors were rumored to open once again, a major fire destroyed the casino.

The hotel, the front facade (designed by architects Zick and Sharp), and the famous sign remain behind leaning wire fences. Although it's closed, it's worth the drive to check out the marvelous front sign and surrounding houses from the 1940s.

Clark County Heritage Museum (1820 S Boulder Hwy) is a bit amateur but quite the Cold War museum. Tree-lined streets hold homes that were architecturally significant to Las Vegas through the 1930s to 1960s. Each house is complete with furniture, electronics, appliances, and decorations of the period. Guests walk from house to house, and plaques inform them of the significance of each. Railroad cars, which were integral to Las Vegas's growth, are also featured.

Don't spend all your money in the casinos! Save some for the stores. Shopping in Vegas can be quite a score, if you know where to go. See the next page for Las Vegas shopping tips.